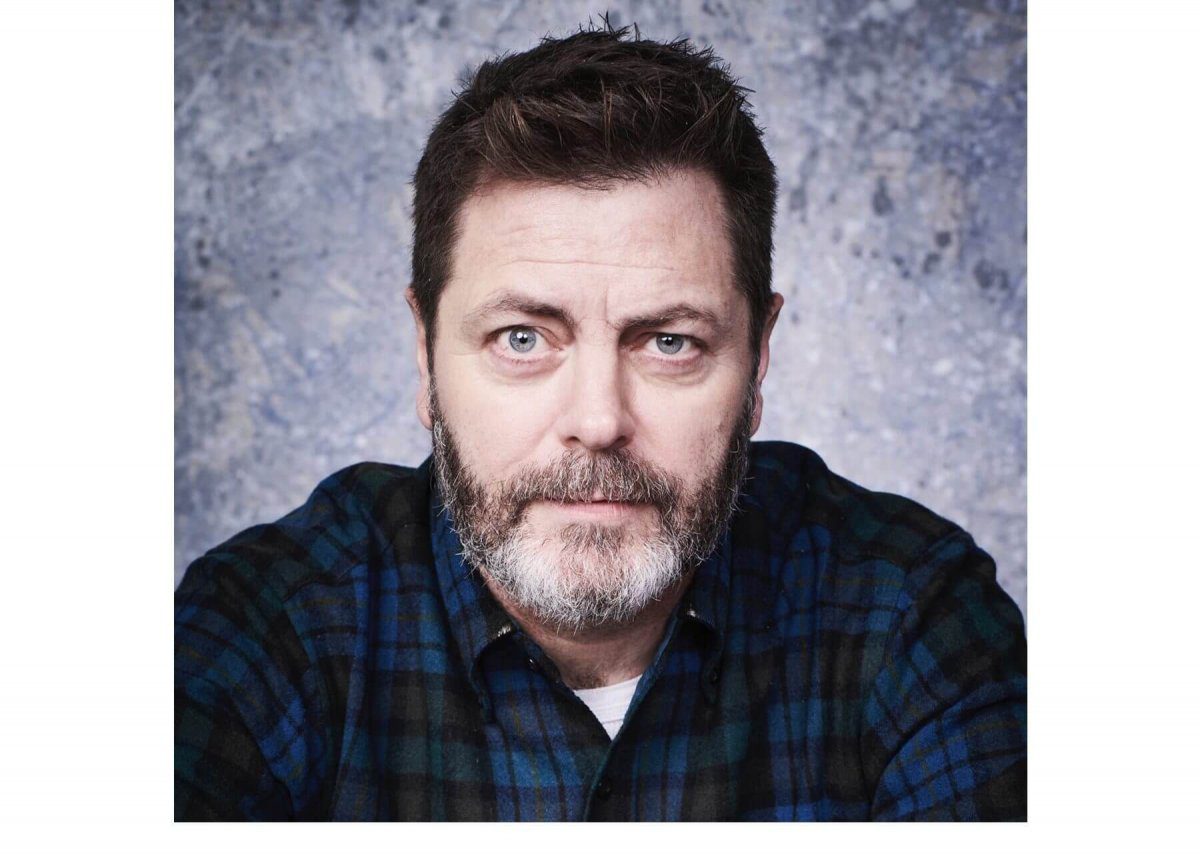 The National Book Foundation announced that Nick Offerman, acclaimed actor and bestselling author, will host the 69th National Book Awards on November 14 at Cipriani Wall Street in New York City. Offerman, best known for playing the role of Ron Swanson for seven seasons of NBC’s Parks and Recreation, will serve as master of ceremonies for the event that will announce the National Book Awards Winners in the categories of Fiction, Nonfiction, Poetry, Translated Literature, and Young People’s Literature. The ceremony will also include the presentation of two lifetime achievement awards, to author Isabel Allende and Doron Weber of the Alfred P. Sloan Foundation.

Nick Offerman’s bio is below, and more information about the National Book Awards can be found here.

Nick Offerman is an actor, writer, and woodworker best known for his role as Ron Swanson on NBC’s hit comedy Parks and Recreation. Most recently, he reunited with his Parks and Recreation co-star Amy Poehler as a co-host and executive producer for NBC’s Making It, an unscripted competition series celebrating craftiness and creativity. Offerman is currently in production on the FX tech thriller series Devs, starring opposite Sonoya Mizuno. The show, created by Alex Garland, will be released next year. Earlier this year, he starred alongside Kiersey Clemons in Brett Haley’s Hearts Beat Loud. Offerman is a four-time New York Times–bestselling author. He released his fourth book, The Greatest Love Story Ever Told, this October with his wife Megan Mullally.

The twenty-five Finalists for the 2018 National Book Awards for Fiction, Nonfiction, Poetry, Translated Literature, and Young People’s Literature (YPL) were announced with Buzzfeed News’s AM To DM. 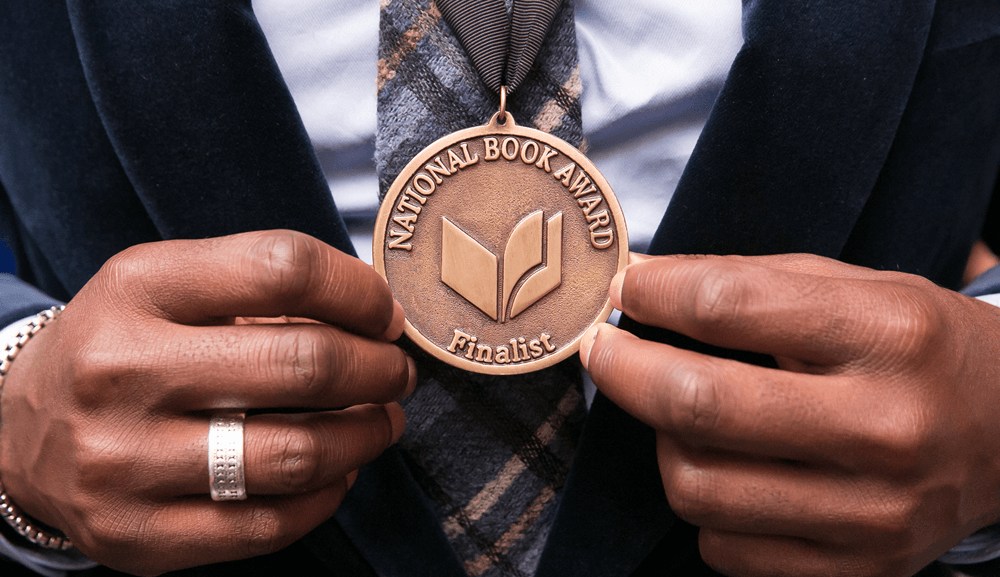 The twenty-five Finalists for the 2018 National Book Awards for Fiction, Nonfiction, Poetry, Translated Literature, and Young People’s Literature (YPL) were announced 10/10 with Buzzfeed News’s AM To DM.  The five Finalists in each category were selected by a distinguished panel of literary experts, and were advanced from the Longlists announced in September. Between the five categories, there are five writers who have been previously honored by the National Book Awards: M. T. Anderson, a 2002 YPL Finalist, 2006 YPL Winner, and 2015 YPL Longlister; Rae Armantrout, a 2009 Poetry Finalist; Lauren Groff, a 2015 Fiction Finalist; Terrance Hayes, a 2010 Poetry Winner and 2015 Poetry Finalist; and Jhumpa Lahiri, a 2013 Fiction Finalist who appears on this year’s list as a translator in the new Translated Literature category. Five of the twenty-five Finalists are debuts.

Publishers submitted a total of 1,637 books for this year’s National Book Awards: 368 in Fiction, 546 in Nonfiction, 256 in Poetry, 142 in Translated Literature, and 325 in Young People’s Literature. Judges’ decisions are made independently of the National Book Foundation staff and Board of Directors; deliberations are strictly confidential.

The Winners will be announced on Wednesday, November 14 at the 69th National Book Awards Ceremony and Benefit Dinner at Cipriani Wall Street in New York City. Two lifetime achievement awards will also be presented at the Awards dinner: Isabel Allende will be recognized with the National Book Foundation’s Medal for Distinguished Contribution to American Letters, presented by Luís Alberto Urrea, and Doron Weber will receive the Foundation’s Literarian Award for Outstanding Contribution to the American Literary Community, presented by Margot Lee Shetterly.

In the debut collection A Lucky Man, Jamel Brinkley populates nine stories set in New York City with a host of Black boys and men—brothers, friends, classmates—all grappling with questions of masculinity, trauma, and entrenched racism. In Florida by 2015 National Book Award Finalist Lauren Groff, the titular state lives at the heart of eleven disparate stories set in suburbs, swamps, and in the middle of hurricanes, examining themes of love, pain, isolation, and the many expectations and experiences tied to motherhood. Brandon Hobson’s Where the Dead Sit Talking follows a fifteen-year-old Cherokee boy placed in a new foster home, reeling from the effects of his mother’s substance abuse and seeking closeness and commiseration with a fellow foster child. In alternating chapters, Rebecca Makkai’s The Great Believers imagines a group queer friends in Chicago in the 1980s and a woman in 2015 searching for her daughter in Paris, chronicling the years of the American AIDS epidemic from its terrifying outbreak to the present, and addressing issues of systemic neglect, the burden of memory, and the rippling consequences of loss and grief. Contemplating mourning and the unexpected places we find solace, Sigrid Nunez’s The Friend is the story of a writer who loses her dearest friend, only to inexplicably be left his aging Great Dane. Infusing its first-person narrative with quotes and anecdotes from literary texts, the novel provides a realistic portrayal of a devoted writer struggling to cope with loss and parsing the complicated legacy of a loved one.

Colin G. Calloway’s The Indian World of George Washington: The First President, the First Americans, and the Birth of the Nation recounts the relationship between Native leaders and our first president, aiming to illustrate the ways in which Washington’s interests were directly tied to the destruction of Native lands and rights, and examining the influence of the country’s first inhabitants on the trajectory of one of the most famous figures in American history. American Eden: David Hosack, Botany, and Medicine in the Garden of the Early Republic by Victoria Johnson sheds light on the life and work of David Hosack, a renowned surgeon at the turn of the 19th century, whose passion for botany would lead him toward groundbreaking pharmaceutical research, the gathering of unmatched collections of flora, and the pioneering of medical practices that took inspiration and direction from the natural world, ultimately impacting the medical and botanical worlds for many years to come. Sarah Smarsh’s Heartland: A Memoir of Working Hard and Being Broke in the Richest Country on Earth details Smarsh’s childhood in Kansas in the 1980s and 90s, addressing issues of generational poverty, class divides, and identity through the lens of first-hand experience. Jeffrey C. Stewart’s The New Negro: The Life of Alain Locke provides a granularly detailed account of the life of the often overlooked Alain Locke, a Harvard-educated philosopher and scholar who was one of the key architects of the Harlem Renaissance. The work explores his years of education, his becoming the first African American Rhodes Scholar, his role as a champion of African American art in the Jazz Age, his complex personal life, and his work and contributions in helping lay the groundwork for contemporary African American studies. In We the Corporations: How American Businesses Won Their Civil Rights, Adam Winkler traces corporations’ long history of influence in the U.S., and the ways in which they have shaped the nation and politics to create a system in which they have rights that closely resemble the rights of individuals.

Teetering on the edge of the American Dream, Pulitzer Prize winner Rae Armantrout’s Wobble seeks to both playfully and forcefully evoke the devastation of a chaotic, unstoppable culture. In American Sonnets for My Past and Future Assassin, National Book Award Winner Terrance Hayes works through fear, bewilderment, and ambivalence as he grapples with a moment in American history both new and entirely too familiar. In her debut collection, Ghost Of, Diana Khoi Nguyen explores the liminality of mourning, reaching out toward the memories and voids left behind by a lost loved one. Questions of systemic hostility and the struggle against oppressive institutions live at the heart of Justin Phillip Reed’s Indecency, which seeks to intimately confront issues of masculinity, sexuality, racism, and more, working to both critique and lament a culture of exploitation. Interiority and restlessness permeate Jenny Xie’s Eye Level, which meditates on the itinerant body and identity, examining shifting and rarely solidifying experiences of solitude, estrangement, and belonging.

Négar Djavadi’s debut novel Disoriental, translated from the French by Tina Kover, follows a young Iranian woman living in Paris, divided between the life she’s made for herself and a rich family history that spans many generations in Iran. Hanne Ørstavik’s short novel, Love, translated from the Norwegian by Martin Aitken, takes place in a remote town in the north of Norway, following a mother and young son separately navigating their way through a single night, disconnected and headed for tragedy. In Domenico Starnone’s Trick, translated from the Italian by National Book Award Finalist and Pulitzer Prize winner Jhumpa Lahiri, an aging illustrator watches over his four-year-old grandson in an apartment in Naples, forced to confront his own troubled past in the face of the child’s youth and innocence. In Yoko Tawada’s The Emissary, translated from Japanese by Margaret Mitsutani, a young boy and his great-grandfather live fully entwined lives in Japan following a fictional, unnamed disaster, their dispositions reflecting and juxtaposing one another. Translated from Polish, Olga Tokarczuk’s Flights, which won Tokarczuk and translator Jennifer Croft the Man Booker International Prize earlier this year, weaves together a bevy of narratives and characters, observed by a single narrator, as they wander through space and time, moving towards or away from the things they seek.

A novel in verse, Elizabeth Acevedo’s New York Times bestseller The Poet X  follows a Dominican teen who her voice in slam poetry, even as she pushes back against a restrictive family life and the unwanted attention of her neighbors. M. T. Anderson, who has been recognized by the National Book Awards three times previously (2002 Finalist, 2006 Winner, and 2015 Longlister), and Eugene Yelchin combine narrative prose and extravagant illustration to tell a story of elves, goblins, and intrigue in The Assassination of Brangwain Spurge, a political satire commenting on conflict, discrimination, and the bias inherent in history as told by those on top. In Leslie Connor’s The Truth as Told by Mason Buttle, a young protagonist struggles to make sense of the unexplained death of his best friend, as a cycle of bullying continues and a new friend goes missing. In The Journey of Little Charlie, Newbery Medal winner Christopher Paul Curtis tells the story of a twelve-year-old boy in 1858 who, after agreeing to seek out three fugitives in order to pay off a debt, must rise above the ugly values of his time to become an unlikely hero. Hey, Kiddo by Jarrett J. Krosoczka is a graphic memoir that chronicles a childhood fraught with familial addiction and abandonment, illustrating the exceptional power of art as survival.