May 15: Deadline for entry form submission

June 28: Books due to Judges and NBF office 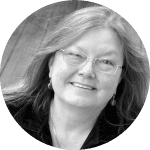 Dorothy Allison is the author of the novels Bastard Out of Carolina, a National Book Award Finalist, and Cavedweller; the short story collection, Trash; essays, Skin: Talking about Sex Class & Literature; and poetry, The Women Who Hate Me. She lives in Northern California, and has a novel forthcoming in 2020 from Penguin.
(Photo credit: Dorothy Allison)

Ruth Dickey is the Executive Director of Seattle Arts & Lectures which brings the best writers of our time to Seattle stages and classrooms for transformative experiences with literature. Dickey’s work has appeared widely and garnered her a Mayor’s Arts Award from Washington, DC and an artist fellowship from the DC Commission and Arts and Humanities. She serves on the Board of the Association of Writers & Writing Programs.
(Photo credit: Libby Lewis)

Javier Ramirez is a longtime Chicago indie bookseller and co-owner of Madison Street Books. He is currently a member of the American Booksellers Association’s ABC advisory council, recently served on the ABA’s middle grade/YA debut Indies Introduce panel, was a 2017 Kirkus Prize for Nonfiction judge, and has co-hosted Publishing Cocktails—a semi-annual Chicago-area social bringing together independent booksellers and authors—since 2011.

Chair – Danzy Senna is the author of five critically acclaimed books of fiction and nonfiction, including her award-winning first novel Caucasia, and her most recent novel, New People, selected as a New York Times Notable Book and one of Time Magazine’s Best Novels of the Year. Senna is a recipient of the Whiting Writers Award and the Dos Passos Prize for Literature. She lives in Los Angeles and is a Professor at the University of Southern California.
(Photo credit: Mara Casey)

Jeff VanderMeer is the bestselling author of the Southern Reach Trilogy. His fiction has won the Shirley Jackson and Nebula awards, and been translated into 38 languages. His novel Borne was recently added to the NEA’s Big Reads program. His nonfiction has appeared in the New York Times, Los Angeles Times, and The Atlantic. VanderMeer has previously been a judge for the Eisner Awards, the Philip K. Dick Award, and the PEN E.O. Wilson Literary Science Writing Award, among others.
(Photo credit: Kyle Cassidy)

Erica Armstrong Dunbar is the Charles and Mary Beard Professor of History at Rutgers University. She is the author of A Fragile Freedom: African American Women and Emancipation in the Antebellum City and Never Caught: The Washingtons’ Relentless Pursuit of Their Runaway Slave, Ona Judge, a Finalist for the National Book Award for Nonfiction and a winner of the Frederick Douglass Book Prize. She currently serves as the National Director of the Association of Black Women Historians.
(Photo credit: Whitney Thomas)

Carolyn Kellogg is a writer and critic. She is the former Books editor of the Los Angeles Times and an award-winning culture writer. She is on the board of the National Book Critics Circle and has been published widely. She lives in Montgomery, Alabama.
(Photo credit: Jay L. Clendenin)

Mark Laframboise grew up in Chicago. His first job in bookselling was at Copperfield & Co. in Macomb, IL, where he pursued an MA in American literature after a three-year stint in the army. He then joined Stone Lion Bookstore in Fort Collins, CO, where he worked for five years as adult book buyer and store manager.  Laframboise currently works at Politics and Prose Bookstore in Washington, DC, where he has been for over twenty years, primarily as head book buyer.
(Photo credit: Politics & Prose)

Kiese Laymon is the author of Long Division, How to Slowly Kill Yourself and Others in America, and Heavy: An American Memoir. He is the Ottilie Schilig Professor of English and Creative Writing at the University of Mississippi.
(Photo credit: Scribner)

Chair – Jeff Sharlet is the bestselling author or editor of six books, including The Family, C Street, and Sweet Heaven When I Die. He is an editor at large for VQR and a contributor to a number of other periodicals, including The New York Times Magazine, Harper’s Magazine, Esquire, and GQ, for which his story on LGBTQ life in Russia won a National Magazine Award. Sharlet is an associate professor of English and Creative Writing at Dartmouth College.
(Photo credit: Julia Rabig)

Jos Charles is the author of feeld, winner of the 2017 National Poetry Series and Longlisted for the National Book Award for Poetry, and Safe Space. She is a recipient of the 2016 Ruth Lilly and Dorothy Sargent Rosenberg Fellowship. Charles has an MFA from the University of Arizona and is pursuing a PhD in English from UC Irvine.
(Photo credit: Cybele Knowles)

Vievee Francis is the author of three books of poetry: Blue-Tail Fly, Horse in the Dark (winner of the Cave Canem Northwestern University Poetry Prize for a second collection), and Forest Primeval (winner of the Hurston Wright Legacy Award and the 2017 Kingsley Tufts Poetry Award). Her work has appeared in numerous print and online journals, textbooks, and anthologies, including Poetry, Best American Poetry 2010, 2014, 2017, 2019 and Angles of Ascent: A Norton Anthology of Contemporary African American Poetry. In 2009 she received a Rona Jaffe Writer’s Award, and in 2010, a Kresge Fellowship. She has been a participant in the Cave Canem Workshops, a Poet-in-Residence for the Alice Lloyd Scholars Program at the University of Michigan, and teaches poetry writing in numerous modes and venues including the Callaloo Creative Writing Workshop (USA, UK, Caribbean). Francis serves as an associate editor for Callaloo and is an associate professor of English and Creative Writing at Dartmouth College in Hanover, NH.

Cathy Park Hong‘s latest poetry collection, Engine Empire, was published in 2012. Her other collections include Dance Dance Revolution, chosen by Adrienne Rich for the Barnard Women Poets Prize, and Translating Mo’um. Hong is the recipient of the Windham-Campbell Prize, the Guggenheim Fellowship, and a National Endowment for the Arts Fellowship. Her poems have been published in Poetry, A Public Space, Paris Review, McSweeney’s, Baffler, Boston Review, The Nation, and other journals. She is the poetry editor of the New Republic and is a professor at Rutgers-Newark University. Her book of creative nonfiction, Minor Feelings, will be published by One World/Random House in Spring 2020.
(Photo credit: Beowulf Sheehan)

Chair – Mark Wunderlich is the author of four books of poetry, the most recent of which is God of Nothingness, forthcoming from Graywolf Press. His other collections include The Earth Avails, which received the Rilke Prize, Voluntary Servitude, and The Anchorage, which received the Lambda Literary Award. He has received fellowships from the National Endowment for the Arts, the Civitella Ranieri Foundation, Massachusetts Cultural Council, and elsewhere, and his poems have appeared in the New York Times Magazine, New Republic, Poetry, The Paris Review, and have been featured on NPR’s All Things Considered. He is the director of the Bennington Writing Seminars graduate writing program and lives in New York’s Hudson Valley.
(Photo credit: Mark Wunderlich)

Keith Gessen is the author of two novels, All the Sad Young Literary Men and A Terrible Country. He is a founding editor of n+1 and the translator or co-translator from the Russian of Ludmilla Petrushevskaya’s There Once Lived a Woman Who Tried to Kill Her Neighbor’s Baby (with Anna Fridrikh), Kirill Medvedev’s It’s No Good (with Bela Shayevich, Mark Krotov, and Cory Merrill), and Svetlana Alexievich’s Voices from Chernobyl. He teaches journalism at Columbia University.

Elisabeth Jaquette is a translator from the Arabic and Executive Director of the American Literary Translators Association. Her work has been shortlisted for the TA First Translation Prize, longlisted for the Best Translated Book Award, and supported by the Jan Michalski Foundation, PEN/Heim Translation Fund, and numerous English PEN Translates Awards. She is also an instructor at Bread Loaf. Her translations include works by Basma Abdel Aziz, Rania Mamoun, Dima Wannous, and others.
(Photo credit: Dan Sauer)

Katie Kitamura’s most recent novel, A Separation,was a finalist for the Premio von Rezzori and a New York Times Notable Book. It was named a best book of the year by over a dozen publications, translated into sixteen languages, and is being adapted for film. A recipient of fellowships from the Lannan Foundation and Santa Maddalena, her two previous novels, Gone to the Forest and The Longshot,were both finalists for the Young Lions Fiction Award.
(Photo credit: Martha Reta)

Chair – Idra Novey is the award-winning author of the novels Those Who Knew and Ways to Disappear. Her translations include Clarice Lispector’s The Passion According to G.H. and Leaning Against This Late Hour, a forthcoming volume of poems by Garous Abdolmalekian, which she co-translated with Ahmad Nadalizadeh. She teaches fiction in the Creative Writing Program at Princeton University.
(Photo credit: Sylvie Rosokoff)

Shuchi Saraswat is a writer based in Boston, Massachusetts. She has worked in the publishing industry for the past twelve years in various capacities including in the editorial department at Houghton Mifflin Harcourt, as a writing instructor at GrubStreet, and as an independent bookseller. In 2018 she launched the Transnational Literature Series at Brookline Booksmith, an author events series that focuses on migration, exile, and displacement with an emphasis on works in translation.

Elana K. Arnold is the critically acclaimed and award-winning author of many books for and about children and teens. Her novel Damsel is a Michael L. Printz Honor book and her novel What Girls Are Made Of was a finalist for the 2017 National Book Award in Young People’s Literature and the California Book Award. She teaches in the MFAC program at Hamline University and lives with her family and pets in Southern California.
(Photo credit: Davis Arnold)

Kristen Gilligan and her husband, Len Vlahos, are the owners of the iconic Tattered Cover Book Store in Denver, Colorado. Prior to buying Tattered Cover, Gilligan spent the majority of her career at the national trade association for independent bookstores, the American Booksellers Association. At Tattered Cover, she works with elementary, middle and high schools; brings authors to schools; created two Teen Advisory Boards, the Colorado Teen Book Con, and the statewide Colorado Big Summer Read. Gilligan sits on the children’s committee for the ABA and is actively involved with the association. She has two young sons and a black lab puppy.
(Photo credit: Charlie Vlahos)

Varian Johnson is the author of nine novels, including The Parker Inheritance, which was named a Coretta Scott King Honor Book and Boston Globe-Horn Book Award Honor Book; and The Great Greene Heist, which was named to over twenty-five state reading and best-of lists. He received an MFA from Vermont College of Fine Arts, where he now serves as a member of the faculty. Varian lives outside of Austin, TX with his family.
(Photo credit: Kenneth Gall)

Chair – An Na is the author of four novels, including The Place Between Breaths, The Fold, Wait for Me, and A Step from Heaven, which was a National Book Award Finalist and won the Michael L. Printz Award. Her honors include the International Reading Association Award and the Parents Choice Gold Award, and her books have been named as ALA Best Books for Young Adults and a New York Times Notable Book. She teaches at Vermont College of Fine Arts in the Writing for Children and Young Adults MFA.
(Photo credit: C. Rolando Diaz)

Deborah Taylor recently retired from the Enoch Pratt Free Library in Baltimore, MD. She has chaired and served on many ALA committees, including the 2015 Sibert Award for Outstanding Informational Books for Children, the Newbery Awards, Coretta Scott King Book Awards and the Michael L. Printz Award. She was named the 2015 recipient of the Coretta Scott King/Virginia Hamilton Award for Lifetime Achievement. She is an adjunct professor teaching young adult literature at the University of Maryland, College of Information Studies.
(Photo credit: Enoch Pratt)