SUTTER KEELY. HE’S the guy you want at your party. He’ll get everyone dancing. He’ll get everyone in your parents’ pool. Okay, so he’s not exactly a shining academic star. He has no plans for college and will probably end up folding men’s shirts for a living. But there are plenty of ladies in town, and with the help of Dean Martin and Seagram’s V.O., life’s pretty fabuloso, actually.

Until the morning he wakes up on a random front lawn, and he meets Aimee. Aimee’s clueless. Aimee is a social disaster. Aimee needs help, and it’s up to the Sutterman to show Aimee a splendiferous time and then let her go
forth and prosper. But Aimee’s not like other girls, and before long he’s in way over his head. For the first time in his life, he has the power to make a difference in someone else’s life—or ruin it forever.

Frankie Landau-Banks at age 15:
A knockout figure.
A sharp tongue.
A chip on her shoulder.
And a gorgeous new senior boyfriend: the supremely goofy, word-obsessed Matthew Livingston.

Frankie Laundau-Banks.
No longer the kind of girl to take “no” for an answer.
Especially when “no” means she’s excluded from her boyfriend’s all-male secret society.
Not when her ex boyfriend shows up in the strangest of places.
Not when she knows she’s smarter than any of them.
When she knows Matthew is lying to her.
And when there are so many, many pranks to be done.

This is the story of how she got that way.

A calico cat, about to have kittens, hears the lonely howl of a chained-up hound deep in the backwaters of the bayou. She dares to find him in the forest, and the hound dares to befriend this cat, this feline, this creature he is supposed to hate. They are an unlikely pair, about to become an unlikely family. Ranger urges the cat to hide underneath the porch, to raise her kittens there because Gar-Face, the man living inside the house, will surely use them as alligator bait should he find them. But they are safe in the Underneath…as long as they stay in the Underneath.

Kittens, however, are notoriously curious creatures. And one kitten’s one moment of curiosity sets off a chain of events that is astonishing, remarkable, and enormous in its meaning. For everyone who loves Sounder, Shiloh, and The Yearling, for everyone who loves the haunting beauty of writers such as Marjorie Kinnan Rawlings, Flannery O’Connor, and Carson McCullers, Kathi Appelt spins a harrowing yet keenly sweet tale about the power of love — and its opposite, hate — the fragility of happiness and the importance of making good on your promises. 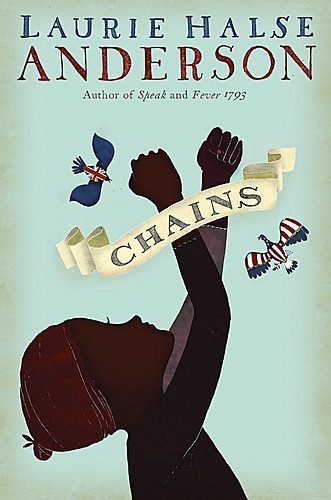 As the Revolutionary War begins, thirteen-year-old Isabel wages her own fight…for freedom. Promised freedom upon the death of their owner, she and her sister, Ruth, in a cruel twist of fate become the property of a malicious New York City couple, the Locktons, who have no sympathy for the American Revolution and even less for Ruth and Isabel. When Isabel meets Curzon, a slave with ties to the Patriots, he encourages her to spy on her owners, who know details of British plans for invasion. She is reluctant at first, but when the unthinkable happens to Ruth, Isabel realizes her loyalty is available to the bidder who can provide her with freedom.

From acclaimed author Laurie Halse Anderson comes this compelling, impeccably researched novel that shows the lengths we can go to cast off our chains, both physical and spiritual.

When Evie’s father returned home from World War II, the family fell back into its normal life pretty quickly. But Joe Spooner brought more back with him than just good war stories. When movie-star handsome Peter Coleridge, a young ex-GI who served in Joe’s company in postwar Austria, shows up, Evie is suddenly caught in a complicated web of lies that she only slowly recognizes. She finds herself falling for Peter, ignoring the secrets that surround him . . . until a tragedy occurs that shatters her family and breaks her life in two. As she begins to realize that almost everything she believed to be a truth was really a lie, Evie must get to the heart of the deceptions and choose between her loyalty to her parents and her feelings for the man she loves. Someone will have to be betrayed. The question is . . . who? Suggested Links

In Richard Howard’s new collection, voices of myth and memory prevail, if only by means of prevarication: the voice of Medea’s mother trying to explain her daughter’s odd behavior to an indiscreet interviewer; or first and last the voice of Henry James, late in life, faced with the disputed prospect of meeting L. Frank Baum and then, later on, “managing” not only Maeterlinck’s Blue Bird but his own unruly cast of characters, including Mrs. Wharton and young Hugh Walpole.

Richard Howard’s honors include the Pulitzer Prize, the PEN Medal for Translation, and grants from the Guggenheim and MacArthur foundations.

In Creatures of a Day, Reginald Gibbons presents intense encounters with everyday people amidst the historical and social contexts of everyday life. His poems are meditations on memory, obligation, love, death, celebration, and sorrow. Some of them show how the making of poetry itself seems inextricably enmeshed with personal encounter and with history. This new collection includes five odes woven from interactions with others, thirteen shorter poems, and “Fern-Texts,” a kind of biographical and autobiographical essay in syllabic verse on the parallel decades of the English 1790s and the American 1960s. Using quotations from the notebooks of Samuel Taylor Coleridge, “Fern-Texts” interweaves the dilemmas of love, ethics, and political engagement in Coleridge’s life when he was in his twenties and in the poet’s own life when, at the same age, he lived in California.

This is Frank Bidart’s first book of lyrics—his first book not dominated by long poems. Narrative elaboration becomes speed and song. Less embattled than earlier work, less actively violent, these new poems have, by conceding time’s finalities and triumphs, acquired a dark radiance unlike anything seen before in Bidart’s long career. Mortality—imminent, not theoretical—forces the self to question the relation between the actual life lived and what was once the promise of transformation. This plays out against a broad landscape. The book opens with Marilyn Monroe, followed by the glamour of the eighth-century Chinese imperial court (seen through the eyes of one of China’s greatest poets, Tu Fu). At the center of the book is an ambitious meditation on the Russian ballerina Ulanova, Giselle, and the nature of tragedy. All this gives new dimension and poignance to Bidart’s recurring preoccupation with the human need to leave behind some record or emblem, a made thing that stands, in the face of death, for the possibilities of art. Bidart, winner of the 2007 Bollingen Prize in American Poetry, is widely acknowledged as one of the significant poets of his time. This is perhaps his most accessible, mysterious, and austerely beautiful book.