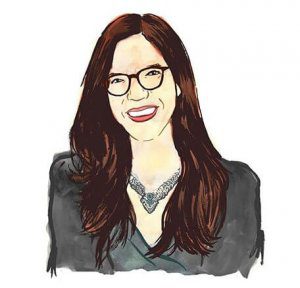 Humor writer Sloane Crosley is not merely funny––David Sedaris called her “perfectly, relentlessly funny.” Crosley has taken up the gauntlets thrown by her predecessors—Dorothy Parker, Nora Ephron, Sedaris—and crafted something rare, affecting, and true. She is the author of The New York Times bestselling essay collections, I Was Told There’d Be Cake, a finalist for The Thurber Prize for American Humor, and How Did You Get This Number, plus the bestselling novel, The Clasp. Her most recent book of essays is Look Alive Out There. Her work has appeared in Esquire, Vogue, The New York Times Magazine, The New York Times Book Review, The Guardian, New York Magazine, The Believer and on National Public Radio, and she is a contributing editor at Vanity Fair.

Moderator: Deborah Treisman
Deborah Treisman is the fiction editor at The New Yorker. She is the host of that publication’s award-winning fiction podcast, the editor of the anthology 20 Under 40: Stories from The New Yorker, and the recipient of the 2012 Maxwell Perkins Award for Distinguished Contribution to Fiction.