Each year the National Book Foundation, with support from the Levenger Foundation, awards the Innovations in Reading Prize to an individual or organization who discovers new ways to empower communities through literature. In 2016, LGBT Books to Prisoners received honorable mention.

LGBT Books to Prisoners sends books and educational material to LGBTQ-identified people in prisons across the country. This work seeks to affirm the dignity of all individuals – particularly the over-incarcerated populations of people of color, poor people, queer and gender nonconforming people, and people with mental illnesses – by providing access to free literature of their choosing.

Operating as a donation-funded, all-volunteer collective, LGBT Books to Prisoners has sent books to over 5,500 people since its founding, and mailed over 3,000 packages of books in 2015. The individually selected reading materials offer information of each person’s choosing and provide a means for LGBTQ incarcerated people to explore and develop their self-identities without fear of judgment. Though other organizations send prisoners much-needed resources, LGBT Books to Prisoners is uniquely equipped to respond to requests from LGBTQ people.

This population is highly marginalized. A 2015 study reports that 70 percent of the LGBT prisoners experienced discrimination or verbal harassment from prison staff; that a large number lacked gender-affirming information and services; and that 71 percent entered prison without completing high school. While our work only fights against aspects of these problems, it has served as a lifeline for individuals across the country. As Don, a prisoner in California who received a package from LGBT Books to Prisoners, wrote, “There are a fair amount of GLBTQ people in prison… We’re the lowest on the social totem pole. No one has an easy experience in prison. Being different, queer, means that your journey will be much harder… Books are, for a lot of us, the only friends we have.” 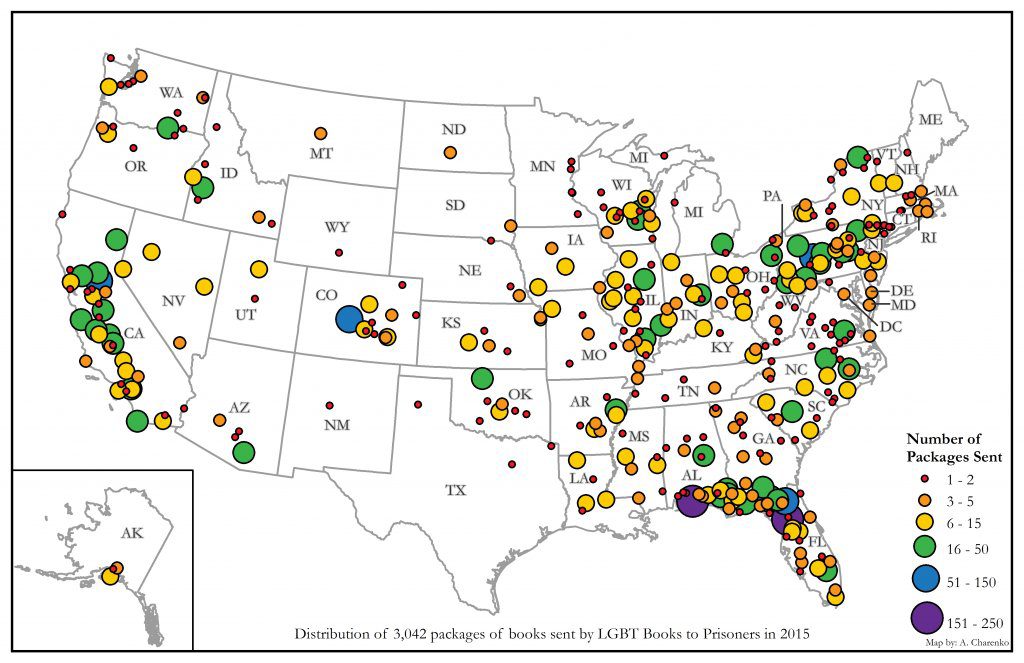 Read our interview with LGBT Books to Prisoners’ Melissa Charenko.

NATIONAL BOOK FOUNDATION: What was the inspiration to establish LGBT Books to Prisoners?

MELISSA CHARENKO: In 2006, Dennis Bergren, who described himself as a “lover of books and education,” began volunteering with Wisconsin Books to Prisoners in the hopes of combating prison injustice. The group received a number of requests for gay books, and Dennis saw an opportunity to meet the needs of LGBT people in prison, many of whom were special targets of unjust treatment by correctional institutions and their fellow prisoners. He began sending LGBT titles under the umbrella of Wisconsin Books to Prisoners. Within a year, interest in the LGBT Project grew, and LGBT Books to Prisoners was formed to meet the unique reading needs of LGBT people in prison.

While there has been some improvement in the conditions faced by people in prison since our organization’s founding, recent reports continue to show that time in prison, particularly for LGBT people, can be very bleak. A 2015 study from Black and Pink reports that 70 percent of LGBT prisoners surveyed experienced discrimination or verbal harassment from prison staff; that a large number lacked gender-affirming information and services; and that 71 percent entered prison without completing high school. These statistics continue to inspire our desire to send resources to members of our community, while incarcerated members themselves also remind us how important this work is.

NBF: How do you match books to a reader’s interests and requests?

MC: Each week, we receive hundreds of letters from LGBT people in prison. Our volunteers read these letters and respond directly to requests from the selection of books that we have on hand. The vast majority of these books are donated by members of the LGBT community and allies across the country, and volunteers do their best trying to match books to prisoners’ requests. We hope that if we don’t find exactly what a person is looking for that the replacement book will become a new favorite or at least open up readers to new authors or books.

NBF: Can you tell me more about restrictions on materials sent to prisons and how your organization handles them?

MC: Different prisons have different restrictions. Some may not allow sexual content or images. Some are very strict about LGBT content. We have a list of all the prisons that we send to and a list of their restrictions. We’re constantly updating this list by reading prison guidelines, asking people in prison if they know of any restrictions, and from previous rejections.

Sometimes we’ll be surprised that a book is rejected. We had an art book from the Louvre rejected because it contained nudity. Once Pride and Prejudice was rejected for its sexual themes. While this censorship is frustrating, time-consuming, and costly, some of the other rejections are heartbreaking: a Missouri prison recently rejected a copy of Trans Bodies, Trans Selves. We appealed this rejection, but they stood by their decision and destroyed the book. We’re working to fight restrictions and policies like these, which seem to be particularly prohibitive of LGBT content and themes, but we also have to work within an oppressive system in order to continue to be able to send any books.

NBF: In what ways is LGBT literature, specifically, vital for these prisoners?

MC: People in prison often lack information. Few have access to the internet, and many prison libraries are inadequate. LGBT people in prison may have specific questions: How do you come out? What does it mean to transition? What are some safer sex practices? Is it normal to be gay? Some of the books that we send answer these questions. Even LGBT erotica can be important.

NBF: How do you see prisoners develop through the books they request in their letters?

MC: We’ve seen the vocabularies and reading levels improve through the books that we’ve sent. We’ve also seen reluctant readers turn into bibliophiles, eager to request another package of books. We’ve also seen people become more comfortable with their gender identities, especially when we’ve sent them materials that directly relate to their [personal] experience— as an African American trans woman, for example. We’ve been corresponding with some prisoners for nearly 10 years so we’ve certainly developed relationships with many of them.

NBF: The letter writing system seems invaluable to prisoners. Being able to have their voices heard and to know a community cares about them must mean so much. How does that relationship impact your volunteers?

MC: Most volunteer opportunities allow volunteers to interact directly with the people they serve, but this isn’t possible for our volunteers. Letters help volunteers understand the conditions faced by those in prison and the impact of receiving books and a note from their community. We often share these letters (in the newsletter) because they show the importance of programs like ours. More importantly, they help to show that people in prison are human.

MC: 97 percent of people in prison will be re-released into our communities. Many will not have received resources for life outside prison. With longer and longer prison sentences, people in prison are likely to encounter a changed world when they are released, and many are subject to restrictive rules that govern their movement, housing, and job opportunities. It’s no wonder that so many people end up back in prison.

While we are angered by this reality, our primary goal is not to provide resources for post-incarceration (in part because a lot of this information is specific to the region that a person will move to once they are released, and as a national organization, it is hard to keep this information up to date). However, many of the materials we provide indirectly help people transition out of the system. We send many books to people interested in learning a skill or trade, such as computer books, plumbing and electrical books, writing books, etc. We’ve also sent a number of GED books which have helped people complete their high school degrees while they are incarcerated. We do send a shorter resource list to people who ask for a variety of services, whether it be re-entry, legal help, or pen pals.

NBF: How has the organization changed or grown over the last 10 years?

MC: When Dennis started sending books to LGBT people, he had a list of about 40 people who wrote to him regularly. Today, we have over 5,200 people in our database, and we have new people writing for books each week. With more visibility on social media and in our community, we have received many more books recently and have had other groups in different parts of the country run book drives on our behalf. Unfortunately, certain genres of books are nearly as hard to find [now as they were] 10 years ago: we never have enough transgender-themed books, gay fiction and erotica, LGBTQ books featuring African and Native Americans, LGBTQ books in Spanish, or dictionaries.

We’re also excited by a number of new initiatives. Last year, we received a small grant to start a Trans Reading Group. The group sought to reduce the isolation experienced by incarcerated trans people using literature to foster discussion. Trans people in prison and trans people on the outside read the same set of books and wrote responses to these books, which authors Julia Serano, Imogen Binnie, and Casey Plett then responded to. We weren’t sure how the project would work, but it was a roaring success!