The 2019 season will bring Brian Lehrer, Sarah Jessica Parker, and Sonia Manzano to NYPL branches in Staten Island, Manhattan, and the Bronx 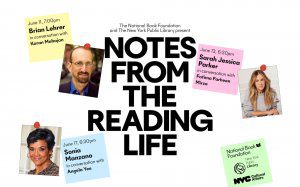 Launched last year as a collaboration between the National Book Foundation and The New York Public Library, with support from the New York City Department of Cultural Affairs, Notes from the Reading Life is a discussion series that brings prominent New York City readers to library branches across the boroughs to share some of the books that excite, inspire, and guide them.

Following the 2018 season which included appearances by Tim Gunn and Desus Nice, the 2019 Notes from the Reading Life events will feature WNYC mainstay Brian Lehrer in Staten Island, renowned actor and Editorial Director of SJP for Hogarth Sarah Jessica Parker in Manhattan, and beloved Sesame Street actor Sonia Manzano in the Bronx. The series will pair each featured guest with a writer or literary figure who will help lead a discussion on the formative role of literature in their lives, the joy of great books, and the memorable reads that have stuck with them, continuously sparking inspiration and excitement.

Kicking off the series at Stapleton Library in Staten Island, WYNC’s Brian Lehrer will be in conversation with Karan Mahajan, author of the National Book Award Finalist The Association of Small Bombs. At Tompkins Square Library, Sarah Jessica Parker will sit down with Fatima Farheen Mirza, whose novel A Place for Us was the first book published by Parker’s imprint with Hogarth, and who also serves as a teaching artist with the National Book Foundation’s BookUp program, which pairs middle grade students with authors for after-school reading groups. Rounding out the season, Sonia Manzano, best known for playing Maria on Sesame Street for over 40 years, will appear at the Bronx Library Center with Angela Yee, host of the syndicated radio talk show The Breakfast Club and a current NYPL Ambassador.

Event information is below, and additional details and registration links can be found at the NYPL website. 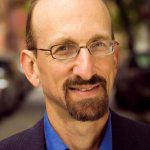 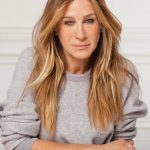 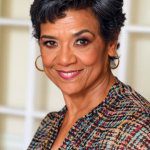