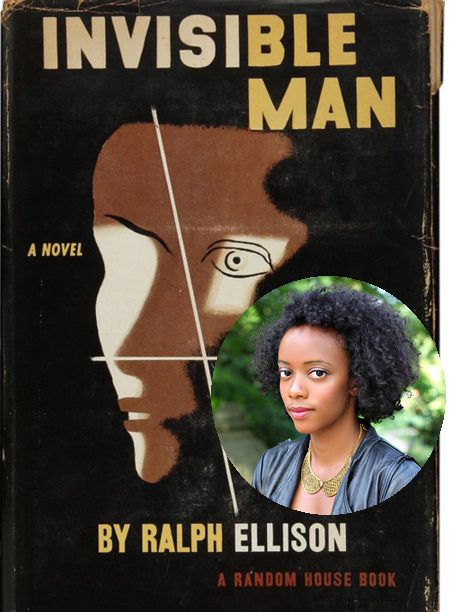 “I am an invisible man. No, I am not a spook like those who haunted Edgar Allan Poe; nor am I one of your Hollywood-movie ectoplasms. I am a man of substance, of flesh and bone, fiber and liquids—and I might even be said to possess a mind. I am invisible, understand, simply because people refuse to see me.”

Thus begins Ralph Ellison’s Invisible Man, a novel that follows an unnamed narrator as he moves from the south to the north, spurred by necessity, curiosity, and the all-too-human hope that somewhere he might be seen, that he might cease to be hindered by racial prejudice and instead be judged on his own merit.

[pullquote align=”right” cite=”Angela Flournoy” link=”” color=”#FBC900″ class=”” size=””]I had not, at the age of eighteen, read a single novel that communicated as much about the tragic and ludicrous function of racism in this country.[/pullquote]

I first encountered the book as many people have in the years since its 1952 release: in class. I was a freshman in college, enrolled in my first African-American literature course. My professor assigned Invisible Man early in the semester and I read it over a weekend. Then I flipped back to page one and read it again. I had never encountered a narrator quite like Ellison’s—bold, observant, simultaneously cynical and hopeful, as quick to laugh as to lament. I had not, at the age of eighteen, read a single novel that communicated as much about the tragic and ludicrous function of racism in this country.

In his National Book Award acceptance speech—the first for an African American—Ellison said, “Despite my personal failures there must be possible a fiction which, leaving sociology and case histories to the scientists, can arrive at the truth about the human condition, here and now, with all the bright magic of the fairy tale.”

I’m inspired by the fact that the first novel by an African American to win the prize was one so experimental. Ellison desired to push beyond what he considered the conventional protest novel. He wanted to shed light on the issues plaguing African-Americans, but not at the expense of style, psychological complexity or plain old literary enjoyment. Invisible Man is indeed reminiscent of a dark fairytale; it is also part adventure epic, coming-of-age novel, satire and tragedy. It accomplishes these things on a formal level while still addressing urgent concerns, many of which are terribly relevant today: employment, education, fair housing, policy brutality, the treatment of veterans and day-to-day racial insensitivity.

The novel endures because in addition to shedding light on some of the nation’s oldest and most persistent sins, it is bursting with incisive, surprising language and unforgettable scenes. Who can forget the narrator’s underground lair illuminated with stolen electricity, or the factory that churns out “Optic White” paint? I return to Invisible Man often because it accomplishes so many things at once, but never at the sake of intelligent, moving storytelling.

Angela Flournoy is a graduate of the Iowa Writers’ Workshop and the University of Southern California. Her novel, The Turner House, was a 2016 National Book Award Finalist and that same year, Angela was chosen as a National Book Foundation 5 Under 35 honoree. She has taught writing at various universities and has worked for the D.C. Public Library. She was raised in Southern California by a mother from Los Angeles and a father from Detroit. 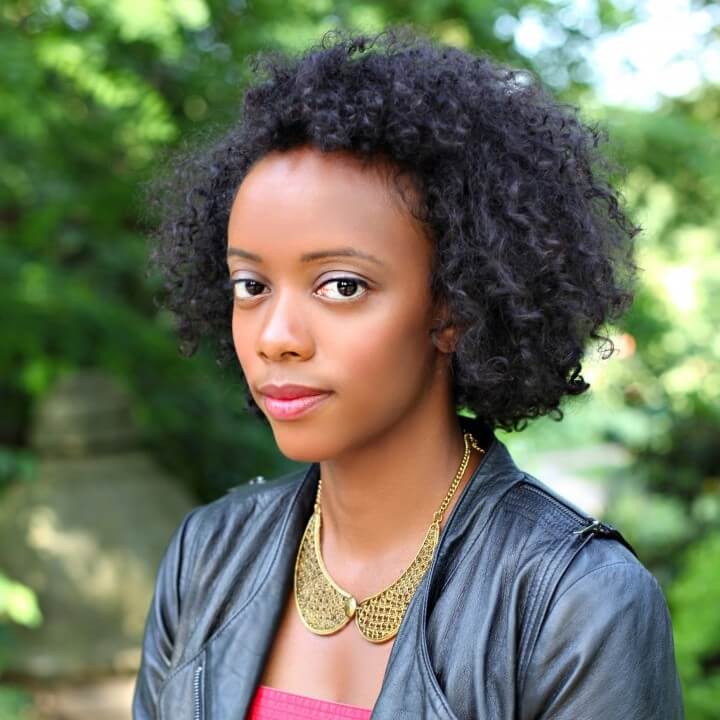 Angela Flournoy’s debut novel, The Turner House, is a remarkable tale of a Detroit family and the difficulties and secrets that now separate them. It is a debut of immense power that moves through generations—from the 1940s to the present national housing crisis—to touch upon decades of Americana. A graduate of the Iowa Writers’ Workshop, Flournoy was one of this year’s “5 under 35” honorees, and the New York Times has called The Turner House “an engrossing and remarkably mature first novel” with “a Márquezian abundance of characters.” But Flournoy is by no means a precocious novice. Her novel demonstrates a masterful style, ultimate empathy, and introduces us to a novelist working at the highest level of the craft.

Alex Gilvarry: Congratulations on your nomination for your remarkable novel, The Turner House. Where were you when you found out about the nomination?

Angela Flournoy: Thank you! I’ve had an excellent fall season of celebrating, first for the long list then the short list. I was at home at my apartment in Brooklyn when the long list was announced, getting ready to do laundry, when I found out via Twitter. I screamed, and called my mother who lives in Southern California and was very much asleep. Once she figured out what I was yelling about at such an early hour, she screamed too.

AG: Detroit is an often-neglected city, both in reality and in literature. Do you have a personal connection to the city? What drew your imagination there? And how did you land on Yarrow Street?

AF: My father is from Detroit, so I’ve visited the city throughout my life. He was raised on the east side in a neighborhood that is now in similar condition to the fictional Yarrow Street. My personal experiences with Detroit have been largely positive. It’s a city that has faced unprecedented hardship, but it’s also a place with strong cultural institutions and proud traditions. I’d never seen both sides of the city rendered in fiction, so that was something I set out to do in my novel.

[pullquote align=”right” cite=”Angela Flournoy” link=”” color=”#FCB900″ class=”” size=””]None of our stories are completely separate from the people around us, so it makes sense to similarly intermingle the lives and viewpoints of characters in a work of fiction.[/pullquote]

AG: Let’s talk about the Turner family. They seem to be intertwined with all aspects of Detroit and American history. Which character came first and how did this family evolve?

AF: Lelah, the youngest Turner child came first. I imagined her creeping around the vacant Turner house at night, using her phone as a flashlight, and I wanted to know why. I had the sense that she had secrets, and I decided that the people closest to her did not know about her gambling addiction. From this first decision bloomed all of the others. I come from several large families, so I wanted to explore the dynamic of being a part of something so vast and interconnected. I initially thought I’d focus on only Lelah the youngest, and Cha-Cha the oldest, but the more I read about the history of black Americans in Detroit, the more I knew I also had to include the stories of their parents, Francis and Viola Turner. This widened the scope of the novel.

AG: There are 13 children in the Turner clan, many our main characters–we follow Lelah, Cha Cha, Troy; then there’s Viola and Francis their parents. Was it intimidating to create such a large family and all of those distinct personalities? It’s no short order for a novelist.

AF: I’ve always loved novels with large casts of characters. In some ways they seemed to be very much like real life. None of our stories are completely separate from the people around us, so it makes sense to similarly intermingle the lives and viewpoints of characters in a work of fiction. The most challenging part was deciding which voices would get the most time on the page, and which would appear less frequently.

AG: I want to ask you about “the haint” or the ghost that haunts this novel. It’s such a great word and I’ve never heard or seen it before.

AF: “Haint” is a southern colloquialism for ghost or spirit; I’ve read explanations of it as a variant on the word “haunt,” or somehow related to the word “ain’t.” It’s the term I was familiar with from the ghost stories I grew up hearing, so I thought I’d employ it in this novel that features migrants from the south settling in the north. I’m fascinated by what aspects of culture are lost in migration, and which aspects linger.

[pullquote align=”left” cite=”Angela Flournoy” link=”” color=”#FCB900″ class=”” size=””]I’m fascinated by what aspects of culture are lost in migration, and which aspects linger.[/pullquote]

AG: Who inspires you?

AF: I’m always open to inspiration, and I find a lot of it comes from my peers, or writers who are only a little older. Kiese Laymon’s novel Long Division, and his honest and love-filled nonfiction has been inspiring to me these last few years. My friend Justin Torres wrote a novel called We the Animals which is a slim, emotional gut-punch of a book, and I learned a lot about language and brevity by reading it. I’m a fan of the visual artist Toyin Ojih Odutola, and I follow her on Instagram to see photos of her works in progress. They’re a reminder that consistent, incremental work can add up to something beautiful.

AG: Do you have a favorite National Book Award winning book?

AF: There have been so many great winning books. I readJesmyn Ward’s Salvage the Bones the fall it won the National Book Award, and was immediately evangelical about it. I was living in Iowa City at the time, and I told anyone who would listen that they needed to read this book. I stopped just short of grabbing strangers by their lapels in the street. It is an elegant and urgent novel. I think I read it in 2 days.

Alex Gilvarry is the author of From the Memoirs of a Non-Enemy Combatant and has been one of the National Book Foundation’s 5 under 35 honorees. His second novel, Eastman Was Here, is forthcoming from Viking.