Summer is here, and so is summer reading.

The National Book Foundation asked authors recognized by the National Book Awards and 5 Under 35 to share a book—new, classic, or somewhere in between—that they’re planning to read (or re-read) this summer. 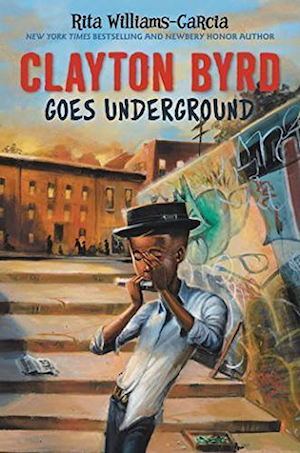 “This summer I’ll be reading Clayton Byrd Goes Underground by Rita Williams-Garcia because my young son has the gift of music, because I just lost my own grandfather, and because I’ll follow Rita wherever she leads us.” 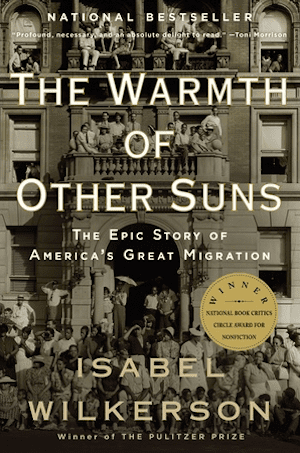 The Warmth of Other Suns, by Isabel Wilkerson

“I am reading The Warmth of Other Suns: The Epic Story of America’s Great Migration by Isabel Wilkerson. This has been on my TBR pile for a while, but I had the chance to hear the author speak at the Nantucket Book Festival and that made me move it to the top. Every American should read it!!!” 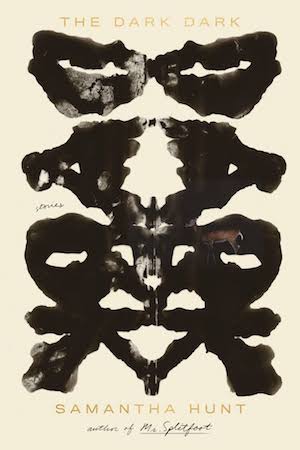 The Dark Dark, by Samantha Hunt

“It’s been awhile since I felt so moved by a story as I was by Samantha Hunt’s “A Love Story,” which appeared in the New Yorker this summer. I kept sending it to friends, especially friends who are new mothers. I also loved her novel about Nikola Tesla, so I was excited to learn that she has a new collection, The Dark Dark, out soon. And three of my favorite writers, Victoria Redel, Claire Messud and Jesmyn Ward, have new novels out soon—I’m hoping to shut off the internet for a few weeks this summer and hide out with these books.”

The American Way of Death, by Jessica Mitford

“It’s summertime, and I’ll be spending a few lazy afternoons reading about the funeral business—or rereading Jessica Mitford’s witty 1963 expose The American Way of Death, to be exact. TAWD is some of the greatest take-no-prisoners muckraking ever to see print, and a textbook on investigative reporting; it is chock full of dark anecdotes (memorably, Mitford’s story of the salesman who tells a grieving woman that if she insists on purchasing the cheapest casket, he’ll have to cut off the deceased’s feet to make him fit); and it is a healthy reminder of something George Bernard Shaw observed long ago: that all professions are conspiracies against the laity.”

“I was cruising my bookshelves for something else when a slim burgundy spine, title erased by the sun, stopped me. It was Giovanni’s Room, by James Baldwin. “Gotta read this,” said the friend who bought it for me, ten years ago, when we were together at a bookshop. Paris, passion, heartbreak, secrets—and Baldwin: isn’t that a recipe for the heat of high summer?” 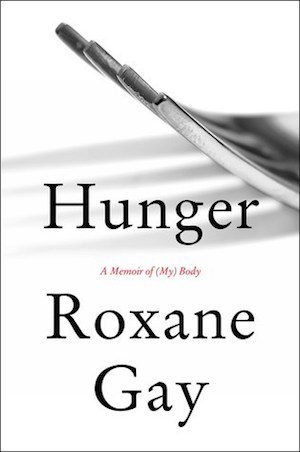 “As a weight-lifting vegan who privately questions why all people are not eating and exercising like me, I am scared to read Hunger. I fear the condescending ignorance of my latent and inhuman fat-phobia—for starters—will be exposed and brutally murdered by Roxanne Gay’s brutally honest exposition of the life and meaning of her overweight body. But I will read Gay’s Hunger this summer. Look for me to grow some more humanity by forcing myself into another bombshell book I fear.” 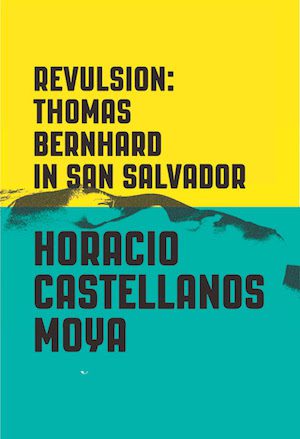 “I was fascinated by all of Castellanos Moya’s previous books, and was intrigued to read that he wrote this one in order to exorcise himself of Bernhard’s influence. I have only sympathy for that, having barely survived my own Bernhard addiction.” 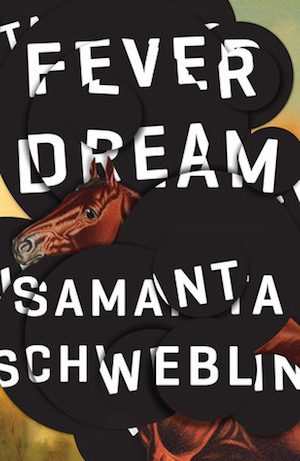 “I’m looking to reading Fever Dream—Argentinian Samanta Schweblin’s novel, translated by Megan McDowell. From what I’ve heard, it’s a brief and unsettling dialogue between characters who have been poisoned by the toxic physical world. Fiction is always on the forefront of navigating what is coming for us—or in this case, as we turn the corner on being able to bring our planet back from the ecological brink—navigating what is already here.” 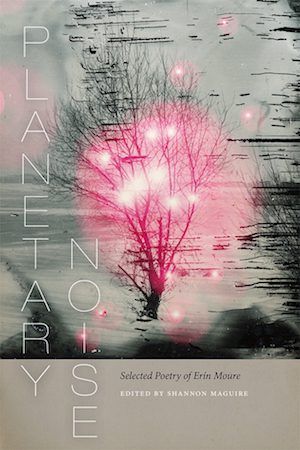 “I’m looking forward to Planetary Noise: selected poetry of Erin Moure, just out from Wesleyan University Press. Moure is one of strangest and strongest poets writing in English—although her experiments cross so many languages and idioms that “English” doesn’t begin to cover it. Hence the planetary. As for the noise: in Moure’s poems, music and thought are beautifully joined.” 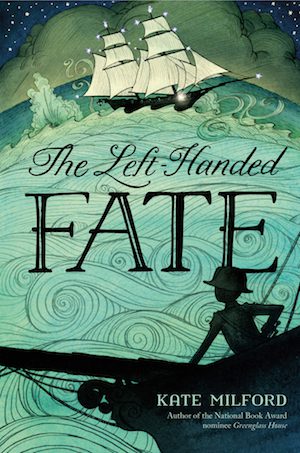 The Left-Handed Fate, by Kate Milford

“Right now I am reading  The Left-Handed Fate, by Kate Milford. I just finished her Blue Crowne, both of which are prequel/companion books to her Boneshaker and Green Glass House books. I love how everything is interconnected but separate stories in completely different time periods. It’s something I try to do in my own work, but she does it with such panache! Her world is so realized that you really do feel like the Nagspeake is a place that is real and you can go visit.” 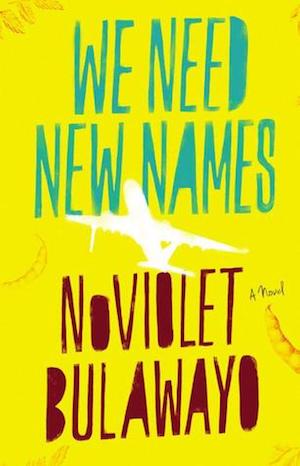 “I’m planning to read NoViolet Bulawayo’s We Need New Names. I love natural writers—people who write ringing, unforced prose—and Bulawayo appears to be one of them. Zimbabwe’s also been a dark mirror to the whole postcolonial experiment, and I’m interested in reading a native’s fictional take on the place.” 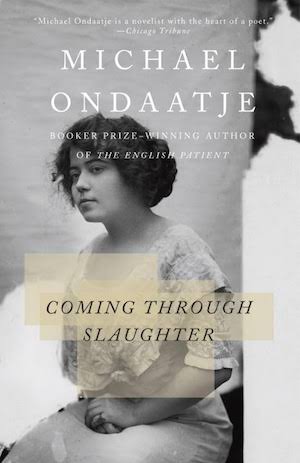 Coming Through Slaughter, by Michael Ondaatje

“This summer I’m re-reading a book that transformed my understanding of how to tell a story: Michael Ondaatje’s Coming Through Slaughter. The book is a loosely historical portrait of the early jazz cornetist Buddy Bolden and is every bit as musical as its subject. Ondaatje wrote poetry at the start of his career, but began writing prose in the 1970s. Coming Through Slaughter is his first novel and combines both styles of writing in elegant and unexpected ways. it is a captivating book—in style and in story—one I continue to return to for inspiration.”

So Far From God, by Ana Castillo

“On my summer reading list is Ana Castillo’s So Far from God. I know Castillo primarily from her poetry, but a fellow writer, who’s also a fellow Latina, told me, “You have to read this book. You will get this book, and you will feel like book gets you.” So much of my reading comes from friends’ recommendations, and my friend recommended this one for its unexpected humor, chilling storytelling, and deep heart of Mexican-American heritage.” 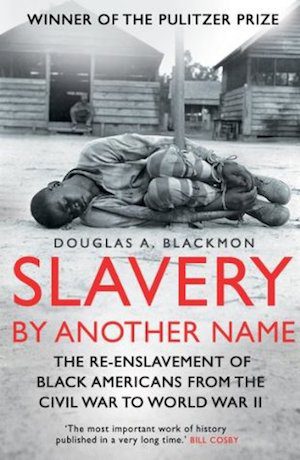 Slavery By Another Name, by Douglas A. Blackmon

“This summer I’m reading “Slavery By Another Name” by Douglas Blackmon. It was recommended to me by artist and civil rights activist Titus Kaphar. It describes our country’s shockingly racist and oppressive history between the Civil War and WWII, and helps me understand the historical context that is picked up and deftly described in Michelle Alexander’s “The New Jim Crow,” a major inspiration for my book.” 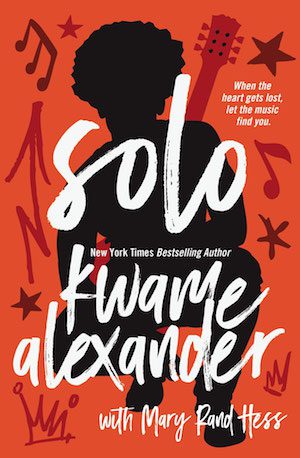 “On my bedside table for next is an advanced reader’s copy of Solo by Kwame Alexander in collaboration with Mary Rand Hess. It’s due in bookstores August 1, just in time for late summer reading. I’m eager to read it because Alexander is one of my all-time favorite writers and a poet who has turned young people into poetry lovers. Besides, his novels in poetry always tell a great story.” 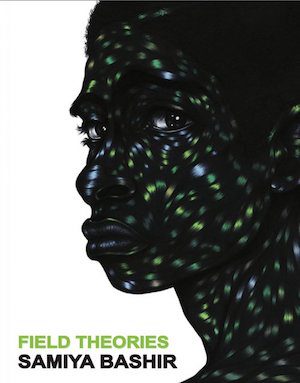 “I’m about to re-read Field Theories (Nightboat, 2017) by Samiya Bashir. The language of these poems is slowly re-orienting me to the layered relationships of scientific, social, and historical spheres; it is astute, challenging and incredibly moving. I’m riveted by its rhythms, its blues in many keys, by its urgent formal restlessness, by the way it journeys, unafraid to move ‘not toward/ exit but through the broken core.'”