Each year the National Book Foundation, with support from the Levenger Foundation, awards the Innovations in Reading Prize to an individual or organization who discovers new ways to empower communities through literature. In 2016, the Harry Potter Alliance (HPA) received honorable mention.

The HPA is a non-profit organization that uses the power of story to turn fans into heroes. Using inspiration from stories like Harry Potter, the Hunger Games, and more, they strive to make the world better through activism and community engagement. Through HPA campaigns, young people have donated 250,000 books to libraries and literacy organizations worldwide, organized over 20,000 YouTube video creators and fans to advocate for net neutrality, made over 3,000 phone calls for marriage equality, and convinced Warner Bros. to switch their Harry Potter chocolates to Fair Trade or UTZ-certified sources. There are over 200 chapters in 22 countries on six continents. There are over 200 chapters in 22 countries on 6 continents, and anyone who wants to be a wizard activist can learn more at thehpalliance.org. 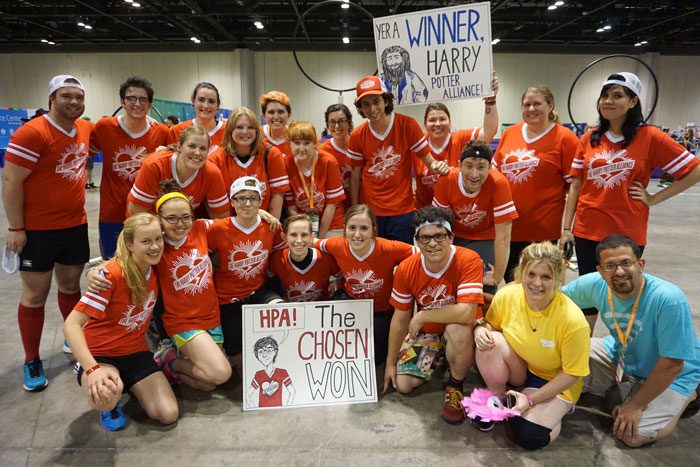 Read our interview with Katie Bowers, Campaigns Director for the Harry Potter Alliance.

NATIONAL BOOK FOUNDATION: You use literature, particularly the Harry Potter series, to inspire activism. Why connect activism with stories, especially these stories?

KATIE BOWERS: Firstly, fans are powerful. When a new Harry Potter book comes out, or a big shake up happens on Game of Thrones, the world knows about it— not because of the power of creators or companies, but because of the enthusiasm and dedication of fans. When directed at social change, that energy and enthusiasm can draw people in and accomplish some big things!

That draw is the second reason it’s so powerful. Everyone is a fan of something. We’ve all imagined ourselves fighting monsters alongside our heroes. Fan activism allows people to take those traits and skills—bravery, loyalty, dedication, problem-solving, etc.—and use them to fight the real world dark arts like oppression, bigotry, and injustice.

Finally, sometimes there is a barrier to enter activism. People think, “Oh, I don’t know enough about that issue,” or “I’m the wrong age,” or “I don’t know how to organize a charity drive, call Congress, recruit volunteers.” Activism isn’t hard, but it can be intimidating. Using pop culture can help break down complex issues into familiar, understandable ideas. It frames activism as an adventure!

NBF: You fight for all kinds of different causes, from net neutrality to marriage equality. Is there a reason the Harry Potter Alliance has remained so flexible in its advocacy goals?

KB: In truth, we care deeply about so many different issues, it’d be hard to pick just one or two. Our community is full of passionate, big-hearted fans who want to help make the world a better place. When a major issue arises— from helping Haiti after the earthquake, to protecting net neutrality, to fighting the anti-trans bathroom bills— wizard activists want to help. Remaining flexible in our goals allows us to achieve our main goal: helping fans channel their awesome energy into positive social change!

NBF: How do you choose the causes you fight for?

KB: There’s no one way that we select the causes we work on. Sometimes they are issues that our staff feels passionately about. Sometimes they are issues that are prevalent in the news or that partner organizations have brought to our attention. Our favorite campaigns are often those that come from our community. Wizard activists will approach us with an idea at a convention or a wizard rock show saying, “You should do a campaign that gets everyone to donate books!” or “Let’s try and make Harry Potter chocolate fair trade!” Those ideas often turn into our favorite campaigns.

NBF: What is the role of social media in this kind of fan activism?

KB: The HPA’s community spans the world. While our senior staff is based in the U.S., we have volunteers, chapters, and individual wizard activists in 25 countries on six continents! Social media keeps us all connected. It helps individuals take action in our campaigns. It draws new people into the work of wizard activism. Social media makes it possible for a worldwide community of wizard activists to come together to effect positive social change on many different levels in countless communities. When our community comes together for real life conventions like our hero-training conference, the Granger Leadership Academy, it feels incredibly powerful and exciting. But that community connection stays strong all year long thanks to the numerous magical online spaces that nearly twenty years of fandom have built.

NBF: Out of all the campaigns you’ve done, what is your proudest accomplishment?

KB: The HPA has had some incredible accomplishments. Through the power of fan activism, we’ve compelled Warner Bros to ethically source all of their Harry Potter-brand chocolates, we’ve rallied over 20,000 fans and creators for net neutrality, and we’ve sent five cargo planes full of medical supplies to Haiti. This year, we’ve continued to accomplish huge things. During our annual Accio Books campaign, wizard activists and librarians joined forces to advocate for library funding, with over 3,000 calls and letters to Congress on National Library Legislative Day. Wizard activists also smashed all previous records this year when they collected and donated over 100,000 books to schools, libraries, and literacy programs all around the world! A portion of those books are headed to Good Shepherd School in Masaka, Uganda. This school was built by community leaders and Masaka’s local HPA chapter. Thanks to the work of Masaka HPA and their Chapter Organizer John Ssentamu, Out of Print, Books for Africa, and wizard activists around the world, the new school will open a library with 10,000 books and 23 new computers later this year! It’s hard to say what our proudest accomplishment is, but helping this incredible chapter found a brand new library ranks right near the top!

NBF: It seems like the Harry Potter Alliance is comprised of more young people than you see in a typical advocacy group like this. How does the involvement of younger activists affect the causes you fight for?

KB: Younger wizard activists bring an incredible energy, honesty, and drive to the work. We believe in intergenerational leadership at the HPA, and our young leaders are just as inspiring and creative as our adult leaders. Everyone can learn from one another, regardless of age. We don’t see age as something that should hold anyone back from engaging in politics and civic imagination. There are numerous things young people do to effect change, from volunteering, to contacting decision makers, to educating their communities, and much more. So often the focus is on turning 18 and voting, but casting a ballot is one small part of being an engaged activist and changemaker. Civic engagement does not begin and end with the ability to vote, especially for an organization that is dedicated to radical youth empowerment.

NBF: Do you think the Harry Potter Alliance has changed how fan activism is seen more broadly?

KB: We do. When the HPA began, fan activism was not a widely known term or practice. Now, more and more activism organizations are utilizing the power of pop culture to inspire people to take action! Our work has been replicated by other activists and studied by scholars, and we are honored to be helping to make activism more accessible, understandable, and joyful!

NBF: What is your favorite moment from the Harry Potter books?

KB: When Harry first visits the Burrow and sees the Weasley family in action together.To watch Harry find a home and a family that loves him so much, after so many years of abuse, is absolutely heartwarming to read every time.

NBF: Now that the Harry Potter books are finished, how do you see the Harry Potter Alliance moving forward in the future? Both in terms of connecting causes to stories and the kinds of causes you might seek.

KB: Well, it’s an exciting year for Harry Potter because the story is continuing to develop through the release of Harry Potter and the Cursed Child and Fantastic Beasts and Where to Find Them. The story continues, and Harry Potter will be a part of the cultural consciousness far into the future. This resurgence of stories is because fans have been excited for Harry Potter for the decade since the stories have ended. However, we also recognize the importance of incorporating new fandoms. We’ve run campaigns like Odds in Our Favor (using The Hunger Games to engage with economic injustice work) and Superman is an Immigrant (promoting immigration reform and fighting to change the negative portrayal of immigrants) for exactly that reason. We also have our Fandom Forward initiative, which provides fans with toolkits for using different fandoms (like Marvel, Avatar: The Last Airbender, and Welcome to Nightvale) to create fan activist campaigns in their communities. Harry Potter is here to stay, but people will always be fans, regardless of the media. Fans will always be inspired by stories of heroes, and at the HPA, we will always be ready to help fans become heroes.

NBF: Has JK Rowling responded to any of your campaigns?

KB: In Time’s 2007 Person of the Year profile, JK Rowling was asked about HPA, to which she replied, “It’s incredible, it’s humbling, and it’s uplifting to see people going out there and doing that in the name of your character.” We continue to be inspired by her stories, and we will forever be hugely honored by her kind words!