The 2005 National Book Award in Nonfiction goes to The Year of Magical Thinking by Joan Didion. 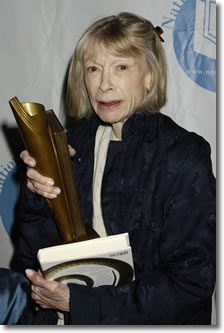 BRENDA PINEAPPLE: Unfortunately, I was asked to say a few words about the process of choosing the nonfiction finalists. Fortunately, I can think of only four words: Five hundred and forty-two. That was the number of nominations this year, the most, I’m told, ever. Terrific biographies, eloquent histories, riveting memoirs, erudite and charming books about physics and physicists, about mathematics, about rock musicians and paintings and painters, heart piercing books about Iraq and Vietnam and veterans of yesteryear, about immigrants and travel and the myriad peoples of America, about American presidents and power, about women prisoners in courtrooms and crossword puzzles and illness and trees and religions and rugs, as well as books about marriage, about mountains, about lightening and, of course, about that most exciting of all endeavors, the writing life.

With such variety of subject matter and style, ours then was a daunting, humbling, often demoralizing task, true jury duty. After a certain point, I talked to no one, saw no one, went no place and for sustenance depended completely on the four enormously talented writers who for several months were the only people on earth except my husband who knew, understood and forgave the manic obsessiveness that our task entailed. These extraordinary judges are Mark Bowden, Dennis Covington, Tony Horwitz and Gregory Wolfe. [Applause] I thank them for their passion, their conviction, their stubbornness, their equanimity, their incredibly hard work and, best, for their ability to articulate over and over what good writing means, what it can do, how it changes us.

Together, we congratulate our five outstanding finalists:

This year’s National Book Award in Nonfiction goes to The Year of Magical Thinking by Joan Didion.

JOAN DIDION: There is hardly anything I can say about this except thank you, and thank you to everybody at Knopf who accepted my idea that I could sit down and write a book about something that was not exactly anything but personal and that it would work. Thank you all. [Applause]