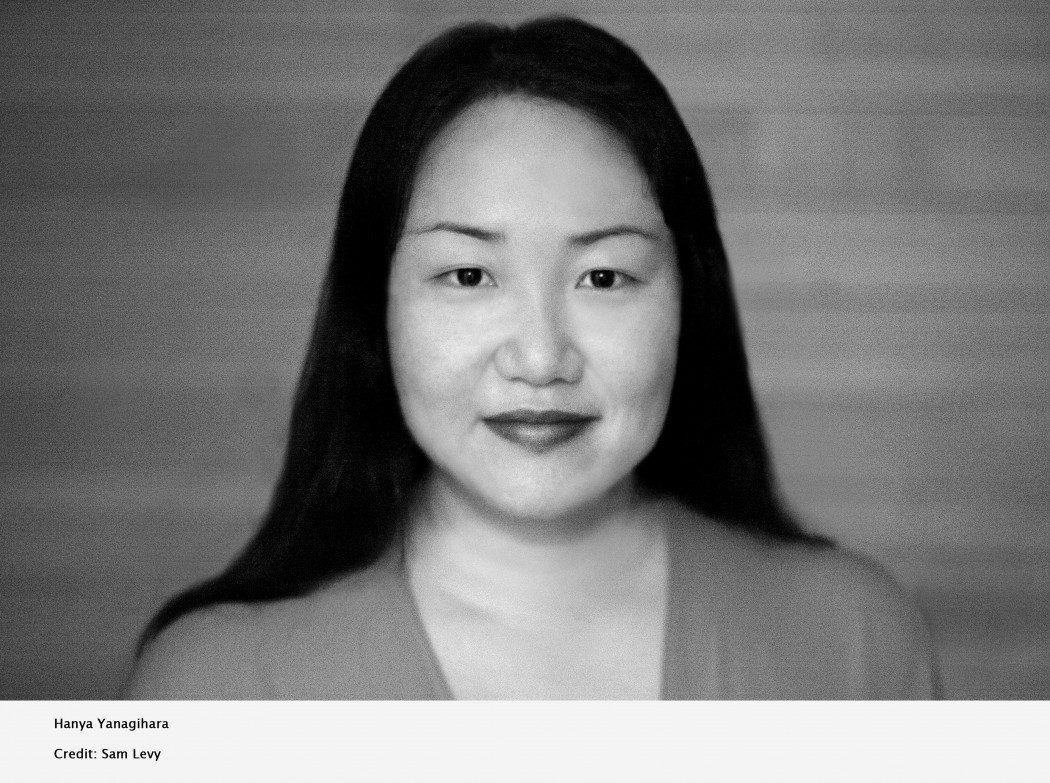 A Little Life (Doubleday), Hanya Yanagihara’s remarkable second novel, follows four friends from college to middle age. The novel centers on Jude, who has suffered a traumatic history none of his friends can fathom and that he can’t bear to speak about, but that nonetheless shapes every aspect of his life as he ascends to the highest echelons of corporate law, acquiring wealth and influence he could never have imagined as a child. Spanning fifty years, the book is an exploration of the legacy of childhood abuse and of the power—and limitations—of friendship. By turns brutal and exhilarating, the novel brings the reader through some of the most frightening territory imaginable, yet remains relentlessly compassionate.

Kirstin Valdez Quade: You’ve written in Vulture about the visual art—photographs, paintings, and drawings—that inspired and shaped A Little Life, and certainly the prose has a visual—cinematic, really—immediacy to it. I love, for example, your description of that ghastly middle-of-the-night taxi ride Jude and Willem take to the doctor’s office and the streetlights, “which slapped and slid across his face, bruising it yellow and ocher and a sickly larval white…” What about books? Were there books that you were particularly in conversation with or that haunted you as you wrote?

Hanya Yanagihara: Not consciously, though after I was finished, I realized I’d in fact alluded to, or borrowed, what I might characterize as tonal chords from other books. Two of my favorite novels of the past decade or so are Mona Simpson’s Off Keck Road and Peter Rock’s My Abandonment, and both of those novels—one, a perfect study of a life alone, a small life, and yet a whole life as well; the other, an unforgettably unsettling study of dependency and manipulation and truth—resonated with me and, I think, found their way into my own book, though in ways I imagine are unrecognizable to everyone but me. (Plus—though you definitely wouldn’t know it from A Little Life—I admire both of those books’ brevity, their authors’ ability to make an entire world in a small amount of space.) There’s also Pnin, which, its genuine wit aside, has always struck me as the saddest of Nabokov’s novels. Finally, I was inspired by Philip Pullman’s Dark Materials trilogy, in particular how boldly and commandingly he moves the literal universe to make room for his own: his creation of a shadow Oxford, for example—the details and physical realities of the actual one bended, reed-like, to suit his narrative—definitely influenced my creation of the boys’ university, which is never named, but for which I rudely displaced Harvard to make space for my invention.

[pullquote align=”right” cite=”Hanya Yanagihara” link=”” color=”#FBC900″ class=”” size=””]One person can’t save another. But to be a member of a real friendship means that you recognize that…and try anyway.[/pullquote]

KVQ: Philip Pullman! I never would have made that connection, but I see it now. There is a timelessness to your novel, and Jude and Willem and Malcolm and JB inhabit a world that that is almost, but not quite, ours, unlinked as it is to the major events in our recent history. Your novel is primarily interested in the internal worlds of these characters as they navigate their relationships.

HY: I’ve spoken about this before, but I wanted to remove every external event from this book: once you remove historical landmarks from a narrative, you force the reader into a sort of walled space, one in which they have no choice but to focus entirely on the interior lives of these characters. There’s no distraction and no respite and no tether, either: I wanted the world of this book to feel by turns intimate and oppressive—and utterly inescapable.

KVQ: Would you talk about your title? One of the many pleasures of reading A Little Life—and there were many pleasures, despite the fact that I was often in tears or sickened or physically weakened as I read—was seeing how the meaning of the title shifts and morphs and is inverted over the course of the novel. What does the title mean to you? Were there others in the mix?

HY: It was always the title, though I had a backup—Seconds, Minutes, Hours, Days: the name of one of JB’s shows—in case I needed it. But no one seemed to object. As you say, the title is meant to shape-shift as the reader moves deeper into the shadow of this book, and it’s indeed alluded to in different ways, but really, I meant it literally: We have such small lives, all of us. And this is the story of one of those lives.

KVQ: This book is, at its core, a love story—a particular kind of love story based on deep and unconditional friendship. Regardless of how Jude might lash out or injure himself, Willem, Harold, and Andy remain steadfast in their commitment to him—and steadfast in their hope that their love can heal him. These aren’t relationships I often see represented in fiction. What especially interested you in the unconditional nature of the friendships?

HY: Among other things, I consider this book a story of two romances: the one between Willem and Jude, and the one between Harold and Jude. But I’m not sure that I’d consider either of their friendships with him—as generous and forgiving as they may be—unconditional. Part of what gives relationships their charge is the sense that they are breakable, that within each one is the possibility of a fissure. (This is true of every relationship between humans: One of the greatest socially sustaining fictions we’ve created is the idea that a parent’s love for a child is inviolable.) So much of this book, especially what it suggests about friendship—its possibilities and its limitations—grew out of conversations with my own best friend, and our discussions about the topic. Friendship is ultimately revelatory because of, not despite, its limitations. One person can’t save another. But to be a member of a real friendship means that you recognize that…and try anyway. It’s the realization that what you’re doing may not resolve anything—but that lack of resolution doesn’t mean it’s not worth doing.

KVQ: And certainly Jude himself can never trust that his friends won’t abandon and hurt him, which is a major source of the book’s tension—and also why, in his darkest moments, he is compelled to test the limits of those friendships. Why do you think Jude never has any particular closeness with women (with the one exception of Ana, his social worker)?

HY: Well, it was deliberate. There’s a lot of artifice in A Little Life, and the near-erasure of women is certainly part of that artifice. Men have such a particular way of relating to one another that I wanted to focus on them. And men, to Jude, are both challenges and embodiments of danger. Often, we’re drawn most powerfully to people who we know have the capacity to harm us.

KVQ: The novel presents the reader with really joyful, transcendent moments, but spends a lot of time in some of the darkest and most frightening places fiction can go. I’ve read that you wrote the book in eighteen months. How did you occupy that darkness as deeply and consistently as you must have needed to in order to write about it so convincingly?

HY: Although the book was as exhausting to write as you might imagine, it was also glorious. Any artist knows and yearns for that period—sometimes hours long, sometimes months—when you feel like you know exactly where you’re going, when your work is propelling you down a track so swift and smooth that you daren’t examine the landscape because you don’t want to disrupt the ride. That’s what it felt like for large, exhilarating parts of this book: It often seemed when I was sitting down to write that I was settling into a toboggan, readying to zoom down a slope. Even darkness can be joyous to inhabit if it’s your darkness, if it’s something you’ve created and feel certain about.

[pullquote align=”right” cite=”Hanya Yanagihara” link=”” color=”#FBC900″ class=”” size=””]My hope was always that the experience of reading this book would mirror my experience of writing it: I wanted it to feel like quicksand, like entering a landscape that literally swallows you and then spits you up somewhere else.[/pullquote]

KVQ: This has been a year full of excitement and deservedly high praise for your book. What praise has meant the most to you?

HY: I don’t read reviews and I’m not on Twitter, so much of the praise I’ve heard has been from people who’ve written me or told me directly, which never loses its thrill. I always said that I wrote this book for two people—for me and for my best friend—so I’m amazed and humbled whenever anyone finds something in it that resonates with them.

KVQ: Finally, before I read A Little Life, I’d heard about it from several friends who were completely under its spell and couldn’t put it down. That was, indeed, my experience. The book is all-consuming, addictive, and there’s a remarkable quality of propulsion to your prose. From one writer to another, how did you do that?

HY: Well, thank you, Kirstin, that’s very kind of you! My hope was always that the experience of reading this book would mirror my experience of writing it: I wanted it to feel like quicksand, like entering a landscape that literally swallows you and then spits you up somewhere else. One of the ways I did this was by eliminating line breaks: once the reader enters one of the subsections, there’s no real natural stopping point until the end of that subsection. It forces the reader to immerse herself. The book is, I hope, a demanding one, not just of time and emotion, but also trust; it should feel greedy for the reader’s full attention and energy.

Kirstin Valdez Quade is the author of Night at the Fiestas, which received a 5 Under 35 Award from the National Book Foundation. Her work has appeared in The New Yorker, The Best American Short Stories, The O. Henry Prize Stories, and elsewhere.

She is the recipient of the Rona Jaffe Foundation Writer’s Award and a Wallace Stegner Fellowship. Beginning in 2016, she will be an assistant professor at Princeton University.