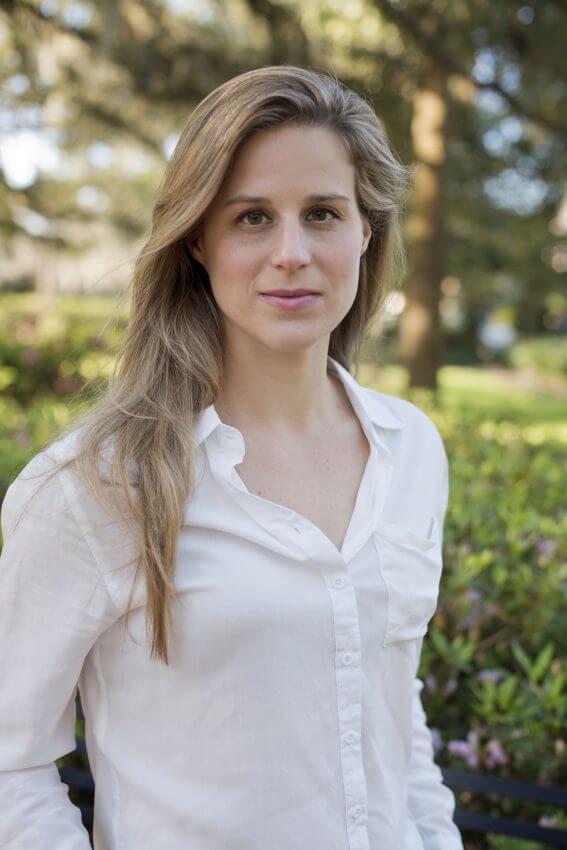 Lauren Groff is the author of The Monsters of Templeton, Delicate Edible Birds, Arcadia, and Fates and Furies, a 2015 National Book Award Finalist. Fates and Furies tells the story of Lotto and Mathilde Satterwhite, the golden boy with acne scars and fortune and the stately woman who loves him. Together, they are a beautiful couple with a beautiful life—but they aren’t without their secrets. Divided into two sections, one told primarily in the point of view of Lotto and the other in Mathilde’s perspective, the novel considers the narratives we tell ourselves in order to love. Intricately plotted and rendered with both lyricism and sly humor,Fates and Furies rides swelling waves before cresting with despair and glittering rage. Groff and I spoke in October, just a few weeks after the National Book Award Finalists were announced. We discussed under-read Shakespeare, sexy married life, and the conditions of genius.

Tracy O’Neill: In Fates and Furies, Lotto’s father is described as “the spawn of a bear,” and his mother worked as a theater mermaid. Mathilde’s mother, a fishwife, returns home with hands “glittering with scales,” and Mathilde believes her children “would come out with fangs and claws.” These motifs advance a set of pseudo-creation myths for your characters and register a folkloric tone, but I wonder also if these animal elements gesture at a sense of what it means to be human.

Lauren Groff: You’re right, and thanks for the smart read. I’m always suspicious of the urge to minimize or simplify a person to a single character trait or category, which is something that we do to strangers every day. Our hearts are complex and are made exponentially even more complicated when our brains are in the mix, and there is no such thing as a perfectly good or perfectly bad person. There’s a little beast in all of us.

I wanted to talk about, among other things, a few universal emotions like rage (particularly feminine rage) and pride (particularly the pride of the creative person). Sometimes descriptors hold tiny cues for the characters’ personalities.

TO: Speaking of rage, during the second half of the book, a revenge narrative emerges at around the same time that Mathilde begins to think about how Shakespeare’s Coriolanus would not have been received as well if it had centered around his mother Volumnia. To what extent was the play an important influence on Fates and Furies? Were there other revenge narratives that you looked to in writing the novel?

[pullquote align=”right” cite=”Lauren Groff” link=”” color=”#FBC900″ class=”” size=””]Our hearts are complex and are made exponentially even more complicated when our brains are in the mix, and there is no such thing as a perfectly good or perfectly bad person. There’s a little beast in all of us.[/pullquote]

LG: I love Coriolanus! It’s underestimated, and I think it’s great, particularly in the figure of Volumnia. During the years I was writing this book, I read as many of Shakespeare’s plays as I could manage, failing to read them all, which was my original idea, but, hey, the historical ones were tough for me. I was most drawn to the figures of the Furies, or Erinyes, particularly at the end of the Orestia. By that, I mean, outside of Shakespeare, I was drawn to the Erinyes!

TO: One of the most striking bits of formal play in the novel is the interspersion of bracketed asides or interventions—I’m not sure if either term is an accurate description. For example, you write, “Lotto’s formidable memory revealed itself when he was two years old, and Antoinette was gratified. [Dark gift; it would make him easy in all things, but lazy.]” Could you talk about the role of these bracketed sections in the narration?

LG: I chose the brackets for a few reasons: asides are my favorite things in plays, and Lotto’s a playwright, so it seems appropriate. I was playing around with time, and ideas about time, and had reread To The Lighthouse by Virginia Woolf and loved how in the “Time Passes” section, Woolf was able to write about a much different kind of time, a more elemental, moody, larger, weather-based time that isn’t quite like human time, though human time comes in with these brackets and reminds the reader that this novel is about people. And my original idea for this book was for it to be two books, but they were written in such wildly different styles that I needed to find a way to stitch them together and the voices from the distance, swooping in like hawks, then out again, was my way of joining them. To clarify on the Virginia Woolf bit, I pictured the voices being from a different distance, a different layer of time, bringing the granular human drama into a kind of perspective. I was doing the opposite of what she was doing, in a way.

TO: Addressing Lotto’s marriage, a young composer named Leo says to him, “it’s exhausting to live with a saint.” Is part of the pain in this book caused by the sacralization of human beloveds?

LG: I think that because we can’t see inside our beloved’s skulls, and because we love them, we may assume that they’re purer and kinder and more generous than they may be. Constant emotional imagination, picturing the internal landscape of a beloved, is an act of love. Not being vigilant about doing that can make us stop seeing our loved ones, so that they seem as if they’re unchanging. But we are always changing, and wildly so.

That failure of imagination, I’d say, is part of the pain of the book in that Mathilde couldn’t be as good as Lotto thought she was, and that he didn’t, perhaps bring to her the kind of imaginative attention she deserved.

TO: For me, some of the best moments in the book were those of deadpan humor. For example, Mathilde says in response to a question about her “strange” appearance, “Oh. That’s because I’ve stopped smiling.” At another point, when Mathilde tries to explain that she doesn’t belong to her husband, Lotto sort of agrees to her terms, then begs for her to bring him a glass of water. Could you elaborate on how you see humor working in the tragic novel? And, would you consider Fates and Furies a tragedy?

LG: I tried consciously to use a lot of memes and structures to play up Lotto’s own idea of himself as a tragic hero, but I attempted to undermine that with the second part—so, no, it’s more of a weirdo hybrid with tragic elements. I wanted this book to be as different from the other one that I was working on that the same time, Arcadia, which was a more intimate book, but more painful—this one I wanted to have lots of sex and modes of storytelling and some broader comedy in it. The deadpan bits were often me making fun of something set up earlier as deadly serious, a way of puncturing.

TO: I’m glad you brought up sex. It permutes in valence throughout the story, sometimes reading as sublime, at others transactional or as an insufficient salve. What specifically were you interested in capturing about sex?

LG: Oh, god, sex is the trickiest and deadliest thing to write. There’s the tired sitcom trope that one stops having sex when one gets married, which is frankly stupid, and I wanted to work against it by having my characters do it a lot, yet I wanted to write something more interesting than the kind of sex scenes I’ve been seeing more and more, where the dude is a fumbly-charming and ends up embarrassing himself. In the end, I just settled on sex being a kind of dynamic conversation with power subtly being traded (or not) throughout, the way that good dialogue is really about the power underneath it.

[pullquote align=”right” cite=”Lauren Groff” link=”” color=”#FBC900″ class=”” size=””]The single-genius model of creativity is insane and destructive and wrong. If you make anything, you’ve been able to make anything because other people have done much of the work for you.[/pullquote]

TO: At one point in the book, Lotto notes that “if he was the one who had the relevant anatomy, a mistake would already have been made with the birth control and little Lotto would be even now kicking its heels in his gut. It was unfair that women could have such primordial joy and men could not.” Lotto may believe he’s entitled to a child, but Mathilde has her tubes tied. Is part of Mathilde’s power her power to not create?

LG: YES. It’s part of her power to make her own reproductive decisions. (I used a curse word but took it out for the NBA, ha). And to know that Lotto, charming as he may have been, would have been absolutely no help, and so she would have raised a kid with this man, resented him, ruined the sexy life they’d made and in which she felt secure for the first time. The way she did it was maybe not the right way. But, according to her, the only way she would have been able to keep Lotto’s attention. I think she was right.

TO: In an interview with The Paris Review, Lorrie Moore said, “I have always had to hold down a paying job of some sort and now I’m the mother of a small child as well, and the ability to make a literary life while teaching and parenting (to say nothing of housework) is sometimes beyond me. I don’t feel completely outwitted by it but it is increasingly a struggle. If I had a staff of even one person, or could tolerate a small amphetamine habit, or entertain the possibility of weekly blood transfusions, or had been married to Vera Nabokov, or had a housespouse of even minimal abilities, a literary life would be easier to bring about.” In Fates and Furies we discover not only that Mathilde has performed all the accounting, cooking, planning, and, early on, earning, but she’s coerced her wealthy uncle to anonymously fund her husband Lotto’s first play and has secretly revised Lotto’s plays. To what extent is an author’s work ever her “own” work? What are the conditions necessary for genius or, at least, very good artistic creation?

LG: I love that Lorrie Moore quote. This was the very basic seed of the whole project, Tracy—I wanted to talk about privilege, how it’s invisible and is often taken for granted. I read lots of biographies of famous playwrights and the wife’s always this shadowy figure, who is supposed to have done nothing to help this great man create his work, when the truth is blatantly obvious that she did a huge amount of work toward the creation of the work. The single-genius model of creativity is insane and destructive and wrong. If you make anything, you’ve been able to make anything because other people have done much of the work for you. It’s so much worse, somehow, when the people taking their privilege for granted are also sensitive and creative—you sense it’s willful ignorance, not just plain ignorance. Very good artistic creation needs enough peace, money, and shelter to come about. Sometimes education, too. These things are rarely the product of a single person’s hard work, but are rather due to millions of invisible hand—taxpayers’, friends’, parents’, you name it.

Tracy O’Neill is the author of The Hopeful. A National Book Foundation 5 Under 35 Honoree, she has published fiction in Granta, Guernica, The Literarian, and Vol. 1 Brooklyn. Her nonfiction has appeared or is forthcoming in TheAtlantic.com, Grantland,Bookforum, RollingStone.com, the San Francisco Chronicle, Virginia Quarterly Review, and the NewYorker.com. In 2012, she was awarded the Emerging Writers Fellowship by the Center for Fiction.