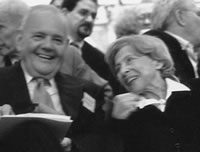 At the 57th National Book Awards Ceremony and Benefit Dinner in New York City on Wednesday, November 15, 2006, the National Book Foundation awarded Robert Silvers and, posthumously, Barbara Epstein, co-founders of The New York Review of Books, with The Literarian Award for Outstanding Service to the American Literary Community. David Remnick, editor of The New Yorker, presented the Award.

Robert Silvers and Barbara Epstein were co-founders of the New York Review of Books, which they edited for over 40 years until her death earlier this year. Robert Silvers continues to edit the magazine.

Prior to joining the Review, Silvers was, from 1959 to 1963, associate editor of Harper’s magazine, editor of the book Writing in America and translator of the multi-author La Gangrene. Before that, Silvers lived in Paris for six years (1952 to 1958), where he served with the U.S. Army at SHAPE Headquarters and attended the Sorbonne and Ecole des Sciences Politiques. He joined the editorial board of The Paris Review in 1954 and became Paris editor in 1956. He also worked as press secretary to Governor Chester Bowles in 1950. Silvers graduated from the University of Chicago in 1947.

Barbara Epstein worked in publishing and at The Partisan Review before becoming editor of The New York Review of Booksin 1963. She began her publishing career at Doubleday & Co., where she served as junior editor after graduating from Radcliffe College in 1949.

Garrison Keillor (host): It’s my honor to introduce for the purpose of introducing somebody else a woman of letters who has written just about everything that a person can write. She’s written poems and fiction. She has written plays, plays that are actually produced. She’s written screen plays that are actually produced, “Fresh Kill,” and has written fiction. In fact, she has sat in a dark room, as many of you are sitting here tonight, and waited for her name to be announced as a nominee for the National Book Awards. Unfortunately, it was not a book with a really award winning title. It was a great book but Dogeaters? Gangster of Love. Better title. Please welcome Jessica Hagedorn. [Applause]

Jessica Hagedorn (introducing Lawrence Ferlinghetti): He’s a funny man. That’s Minnesota for you. Good evening, everyone. This year, the National Book Foundation decided to create the Literarian Award in order to recognize and honor the people who have dedicated their lives to loving, nurturing, publishing and making great literature available to a wider audience in America. I feel an enormous sense of hometown pride in introducing tonight’s recipient of this award. He is a beloved poet and prolific author, a visionary publisher, and after all these years, still the hippest and coolest bookseller around. [Applause]

Yeah. Coney Island of the Mind his best known, best selling collection of poetry is considered a modern classic. He founded City Lights, the legendary San Francisco bookstore in 1953 with Peter Martin. Soon after, he launched City Lights Publishing House. His courageous publication and defense of Allen Ginsburg’sHowl led to his arrest on obscenity charges. The trial and his subsequent acquittal brought national attention to the San Francisco renaissance and the literary movement known as the Beats. As you can read in the program, this historic First Amendment case established a legal precedent for the publication of controversial work.

I was 15 years old, fresh off the boat from the Philippines, when the poet, Kenneth Rexroth, took me on my first outing to City Lights in North Beach, a glamorous, grown up, and to my feverish teenage mind, delightfully dangerous destination. I’ll never forget that it was close to midnight, yet the cozy, colorful bookstore was humming with activity. Scruffy bohemian types lounged about downstairs, browsing through the paperback books and the latest issues of Umbra andEvergreen Review. The friendly staff didn’t seem to feel the need to pressure anyone into buying. Poetry by Lorca, Neruda, Mayakovsky, Apollinaire, plays by Samuel Beckett and LeRoy Jones, novels by Jack Kerouac, Ken Kesey and James Baldwin, William Burroughs. Quite a boys’ club, right?

Teenage me was in heaven. After that first night, I kept going back, sometimes alone or with one or two likeminded book-loving teenage rebel pals. City Lights was our haven, a sort of funky alternative school for kids like us who dreamed of becoming writers and artists. The welcoming beautiful energy in this independent unpretentious first class bookstore has much to do with the poet and activist who is its public face. To this day, City Lights remains a vibrant San Francisco literary landmark and a Mecca for writers and readers from all over the world. Thanks to his unflagging vision and generous open spirit, the Press continues to thrive, publishing a remarkable list of cutting edge authors while keeping many hard-to-find books in print.

Ladies and gentlemen, on behalf of the Board of Directors of the National Book Foundation, it gives me great pleasure to present the first Literarian Award for outstanding service to the American literary community to Lawrence Ferlinghetti.

Lawrence Ferlinghetti: For a while, I thought we were on “Prairie Home Companion”. I don’t have half the wit that Garrison does, that makes me a halfwit. Anyway, I am honored indeed and I’m also glad to have published a book by my introducer.

What is a “literarian” anyway? Sounds a bit old school, doesn’t it? A smart friend of mine said, “It’s for old guys.” Well, it’s for young guys of both sexes and many colors to carry forward the tradition of great literacy. I come from a New York generation which was before the Beat Generation, a generation that assumed that you would know the allusion when you referred to such things as Prufrock or Stephen Daedalus or Maud Gonne or Godot or Penelope’s unraveling her knitting at night or Dover Beach or Walden Pond or “lilacs last in the door-yard bloom’d”. The absence of Third World writers, authors of color, from the list is shocking but, at that time, nobody even thought of such a thing back then, in the last white century.

Today it’s a cliché at this point. But faced with the dumbing down of America, the literarian is really an endangered species. It is not true that President Bush believes that anyone caught reading a book should be banned from government but the barbarians certainly are at the gates and our commercial dominant culture welcomes them. The dominant American mercantile culture may globalize the world but it is not the mainstream culture of our civilization. The true mainstream is made, not of oil but of literarians, publishers, bookstores, editors, libraries, writers and readers, universities and all the institutions that support them. That is the real mainstream of our civilization.

It will survive, if anything survives, after the electricity goes off and electronic civilization fades away, when Nature strikes back in retaliation for what the dominant culture is doing to it. Coming to your local theater soon, the day after tomorrow. See you at the show.