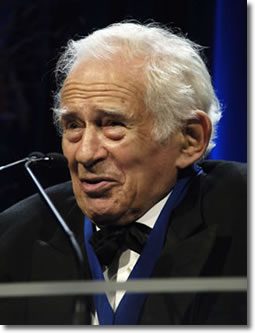 Garrision Keillor (host): Toni Morrison has won so many awards and prizes it is easier to talk about the ones that she has not won like the Heisman Trophy, the Cy Young Award. To the best of my knowledge, at least, she has not. She has won this prize and the other one and the one named for Joseph Pulitzer and she has, of course, won the prize where the phone call comes in the morning from the guy with the Swedish accent. You must wonder which of your friends would be capable of doing this to you. This year it is 35 years since the publication of her first novel, The Bluest Eye. Please welcome Toni Morrison. [Applause]

Toni Morrison (introducing Norman Mailer): Thank you. Thank you. Actually, several people ought to be standing here next to me to complete this recognition of Norman Mailer’s career. No one perspective can voice or even successfully accomplish it. Certainly, there should be someone who experienced World War II. There should be another with very keen memories of the Vietnam era. A third who fell under the sway of Muhammad Ali. There should be a fourth who understood the interior void of a death row inmate, how attractive death is to a killer, even or especially if it is his own.

Such a collection of readers and writers who prize the carnivorous intelligence accompanied by huge and provocative talent would underscore what I believe to be simply undeniable, that the history of American literature in the 20th and early 21st century would be both depleted and inaccurate, minus the inclusion of the work of Norman Mailer. [Applause]

In fiction, nonfiction, polemic, literary criticism, he has plumbed war, Hollywood, the CIA, death row, politics, moon shots, his gaze as wide as his intellect is passionate. Well, loud and justifiable praises of his prowess as a writer, however, competes with some rather violent objections to some of his views. I have to say I have my own list of objections that I can peruse at my leisure, not least of which is an almost comic obtuseness regarding women and race, [Laughter, applause] which I have to say even he admits to.

But at the very least, excoriating this particular writer’s view is a battle worth engaging. It is not a pseudo-struggle with a sly dissembling antagonist who hides behind the pale pose of the mediocre. Norman Mailer is nothing if not a worthy adversary. If one thinks of America as a charged field, Mailer is one of its tallest lightning rods. It has always seemed to me that the body of his work is very much like the America he loves and chastens.

Like the country, the man, the writer, is fascinated by the romance of violence. Like the country, he is confrontational in his despair of American military confrontations. Like the country, he is routinely disrespectful of borders, trespassing literary genre and classifications with glee, innovative, creating new vocabularies as he merges the traditional with the new. He is willing to dissect the imperial demands of his own ego while he deplores the demands of the national ego, endlessly confessional, offering his feelings and experiences to help educate and shape those of others.

Generous, intractable, often wrong, always engaged, mindful of and amused by his own power and his prodigious gifts, wide spirited. Like the nation itself, sui generis, a true original. I think you would agree that for a writer this prolific, this able with language, he should have the last word. So let me quote it. If, as he has said, “Writers are the marrow of the nation, its nutrient,” then as a nation, as readers, we are healthier, stronger, smarter, more resistant, perhaps even more honest because of him. Ladies and gentlemen, Norman Mailer.

Norman Mailer: It’s a curious night. First I was cursing Larry Ferlinghetti because he was saying all the things that I’m going to say and then I was being honored by Toni Morrison whose gift, I think, was to show me, since she was talking about me, her gift was to show me that I am obtuse about women. [Laughter] Which reminded me of my wife because my wife can hear 50 paeans of praise and one small criticism and all she will ever remember is the small criticism.

So I’m obtuse about women but wary of them. At any rate, I thank Toni Morrison for her prodigious generosity. On my best days, I have that high an opinion of myself but not on my worst ones.

Now, here comes the speech, the speech for which I cursed Ferlinghetti. Something interesting happened with this speech on the way to the occasion which is that I forgot it. We were ten minutes away from my home and I shrieked and said to my wife and one of my sons, “We have to go back. We have to go back. I put my speech in the wrong suit jacket.” It never happened to me before. May it never happen to me again.

All right. In these years, I’m feeling the woeful emotions of an old carriage maker as he watches the disappearance of his trade before the onrush of the automobile. The serious novel may soon be in danger of being adored with the

same poignant concern we feel for endangered species. There is all but unspoken shame in the literary world today. The passion readers used to feel for venturing into a serious novel has withered. Indeed, how many of you even in this audience do not obtain more pleasure from an egregiously cruel review of a good novel in the New York Times than from the art involved in reading that good but serious book?

Meanwhile, we are told that literacy is improving and more novels are being read than ever before. That may be true. It is just that the vast majority of such successful fiction is all too forgettable. The purpose of a great novel is not, however, to cater to one’s passing needs but to enter one’s life, even alter it. So the great novel will kill no time on airplane trips. They are not good page turners. They are in danger of becoming a footnote to our technological, cybernetic and advertising worlds.

Nature’s rude beast has appropriated the marketplace. The good serious novel, and most certainly, the rare great novel, is now inimical to the needs of this marketplace. The most dedicated novels of the future are lucky, therefore, to have the same lack of relation to the ambitions and greed of the world as fine poetry offers today. So too will the serious novel be seen as doing little harm provided it is kept on that high shelf we save for family whatnots.

If these gloomy predictions are correct, let us look at least at what we may be losing. Civilization has become a dangerous vehicle, hurtling toward a fate that could be dire. Is it not by now a giant who can no longer see? It is too blind in its ambitions and blind in its wars. Its great limbs do not coordinate with each other. Theology is one of those limbs, is helpless before the unanswered questions of the holocaust, even as formal religion insists on an all good and all powerful God. While fundamentalists are gung ho in their manic rush to godly judgment, liberals are in a state of woe before their increasing powerlessness.

The great light of the Enlightenment which fortified their sense of entitlement over the last three centuries is now a flickering light. The military would do well to become familiar with the works of Max Ernst or Salvador Dalí since war has become surrealist.

What then can a great novel offer such a world? It is possible that the novelist, if his or her talent is deep, may even unravel enigmas that major disciplines are not ready to approach. Our field, our ground, our illumination does not derive from disciplines which have hardened over the centuries to advancing one chosen field of inquiry at the expense of others. We are bound to no discipline but the development of our own experience or, if we are fortunate enough to find it, our vision. So a gifted few may even be ready to explore experience far into moral advances that are not available to other professions.

On the other hand, novelists are rarely heroic. Gawky, half formed, shy, perverse, spoiled, vain in their youth, so too can their vision be astigmatic. Nonetheless, the best do look to honor the profound demands of their profession by offering insights with which goodreaders can enrich themselves on the meaning of their lives. Whose comprehension of society is not more incisive after reading Proust?

Who does not know more about language once James Joyce is encountered? Who says that compassion has not been deepened by living in Tolstoy’s novels?

So where are the future Tolstoys, the future Joyces, Dostoevskys, Prousts? In the interim, let me salute the award winners who are yet to be honored on this evening. May they startle us with the breadth and power of their vision. May there be a Theodore Dreiser or a Herman Melville among them. I would say thank you for this award you are giving me tonight and I would add one coda: Would the English nation have been as great in surviving without Shakespeare? Would Ireland be entering a period of prosperity today if not for James Joyce? Thank you.