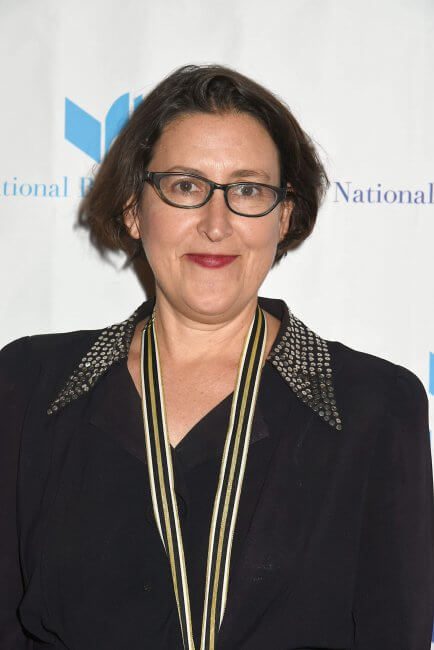 The characters in Karen E. Bender’s Refund, a Finalist for the 2015 National Book Awards, live in tenuous comfort, struggling across the changing territory of financial plains. An ailing eighty year-old swindler boards a cruise ship with the last of her savings in a red velvet purse. A dedicated employee who went into airport security after losing both her parents in a car crash is told that she’s a candidate for layoffs. A cat causes a married couple to reexamine their relationship when he tells the wife he loves her. That’s right—the cat. Because that’s the thing about the thirteen gripping tales in this collection, as much as they are about the disappointments accrued during our hourly wage lives, they’re also about the moments of grace that get us up in the mornings to go through it all again. We chatted on the phone while Karen was getting take-out and then followed up by e-mail to talk in more detail about her third book.

Courtney Maum: These timely and disturbing tales about the role of money in our lives move expertly between scenes of hilarity and despair. That’s what I loved so much about this collection—you really capture the way that beauty exists even in our darkest moments and vice versa. Could you talk a little bit about how you decide—instinctively or otherwise—to balance hopelessness with humor?

Karen E. Bender: I tell my students that powerful writing balances at the edge of hope and despair. Humor works in fiction because it is the individual shouting back at the abyss, and the reader engages with the humor and shares a moment of power with the writer. I see everything with a sense of absurdity, as a coping mechanism, really, and it finds a way into my stories even when I try to just write something dark.

One example: the story Refund deals with New York City right after September 11th, which is obviously a very dark topic. But the story has moments of somewhat surreal absurdity that reveal the strange experience of living in downtown Manhattan at that time. A local park is closed for asbestos cleaning, as the parks were covered in toxic dust, and there are signs warning people not to enter the park. Clarissa, the main character, and her young son, walk into the park and her son hurls his ball toward a garbage bin and a sign that announced, “No playing in or around this container.” Clarissa is terrified, but a janitor tells her not to worry—that the container just held rat poison. Then Clarissa observes—“She never thought the term rat poison would sound nostalgic, but she was strangely calmed.”

[pullquote align=”right” cite=”Karen E. Bender” link=”” color=”#FBC900″ class=”” size=””]I see everything with a sense of absurdity, as a coping mechanism, really, and it finds a way into my stories even when I try to just write something dark.[/pullquote]

CM: Your portrayal of parenting in these stories (whether biological or not) perfectly communicates the desperate attachment, the furious exhaustion, the helpless rage against mortality that parenthood can bring. Do you think that being a parent yourself has influenced your writing?

KB: The journey of parenting is deep and gorgeous and complicated—but parenting is perhaps the most cute-ified activity in American culture—the little onesies decorated with hippos one receives at the birth of a child distract you from the immense, helpless love that overtakes you, and also the fact that the child (from the moment she/he decides to be born!) has her/his own clear desires, complex plans. Parenting is about connection and separation and mortality and time; it has made me more aware of everything, really, how the smallest actions and events are just wonderfully moving and profound.

CM: Employment—both the securing and maintaining of it—is central to all these stories. During a writing seminar, I heard the author Benjamin Percy plead with his students to give their characters jobs. What do you think of the way jobs and job hunting is portrayed in American fiction today?

KB: I agree with Percy, mostly because the world of work and job-hunting is so dramatic! I recently taught a wonderful story by Mavis Gallant, (who is Canadian), called “From Zero to One,” (in her collection Varieties of Exile) which is about her character’s experience as the only woman in an all-male office during World War II; one line that I love from that story is “The fact is that I did not know the office was dull.” Andrea Barrett’s story, “The Ether of Space,” (in her collection Archangel), features an astronomer and her work as gorgeous metaphors; John Cheever writes beautifully about the strangeness of the work world of New York City. Knowing what a character’s work (or lack of work) is can really help you ground a story.

[pullquote align=”left” cite=”Karen E. Bender” link=”” color=”#FCB900″ class=”” size=””]Parenting is about connection and separation and mortality and time; it has made me more aware of everything, really, how the smallest actions and events are just wonderfully moving and profound.[/pullquote]

CM: Where were you when you got the news of the nomination? You shared with me that this collection’s path to publication was hard and long. Do you have any advice for other writers out there who are working on short story collections right now?

KB: I learned about Refund’s place on the NBA Longlist when it was announced on the Internet, along with everyone else. I knew that the Fiction Longlist would be announced at 9 am on Thursday, and I was curious who was on it, so I clicked on the NBA site then. I saw the cover of Refund there, that glimmering gold, and for a moment, I thought I had gone insane. I was out of town, and I called my husband, and said, “Refund is on the NBA Longlist. Can you check? Is it real?” And he looked and said, “It’s real.” And then we screamed.

Yes, the road to publish this book was long and complicated. To writing students, I would say: if you like to write short stories, read them, discuss them in book clubs, engage with them; make them part of the literary conversation. And write what you want. Work hard. Don’t let your work into the world until it is finished. Don’t ever stop.

Courtney Maum is the author of the debut novel I Am Having So Much Fun Here Without You, from Simon & Schuster/Touchstone; the humor columnist behind Electric Literature’s “Celebrity Book Review.”; and the book reviewer for the 2022-based news outlet, “Sirens” founded by Richard Nash. She also co-writes films with her husband and names products for various branding agencies around the country. @cmaum