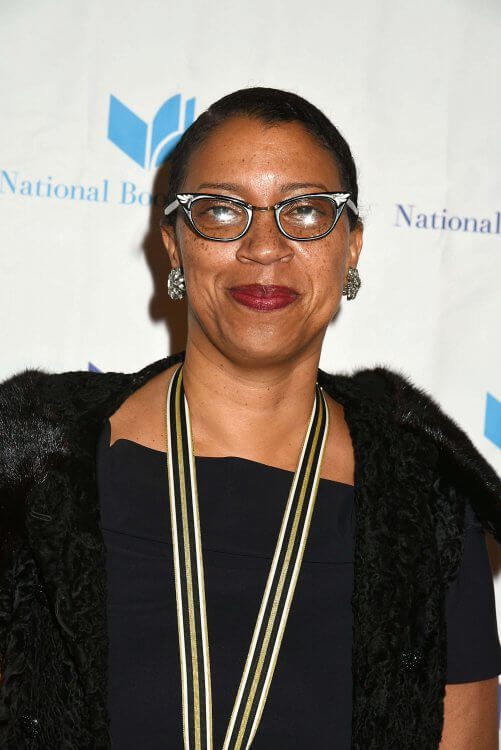 Whether we realize it or not, we access a history much older than ourselves. We may read and write in seclusion, but the words and wit are in fellowship with the millennia behind us. In Voyage of the Sable Venus, Robin Coste Lewis skillfully reminds us of this, and reminds us that all art is drawn from the collective and merely colored by the individual.

Robin Coste Lewis is the author of Voyage of the Sable Venus. Lewis has taught at Wheaton College, Hunter College, Hampshire College and the NYU Low-Residency MFA in Paris. Born in Compton, California, her family is from New Orleans.

Nicole Sealey: In the prologue to the title poem you write, “The formal rules I set for myself were simple.” Simple? [Ed. note: The title poem is a narrative poem comprised solely and entirely of the titles, catalog entries, or exhibit descriptions of Western art objects in which a black female figure is present, dating from 38,000 BCE to the present.]

Robin Coste Lewis: Well, I think “simple” can actually be the most difficult. Being complicated is often easier for me because it’s just a lot of smoke and mirrors. It’s easy to pretend away my ignorance.  Not always, but often when I’m being self-consciously complex, it’s usually a sign that I’m hiding. Add to this that the desire to appear clever is relentless. So I will do anything to quiet my ego.  Restricting myself formally is one of a few solid strategies I’ve found to be quite effective.

One of formalism’s great gifts is that it allows me to forget myself completely.  I get so caught up in the puzzle of a rule that I forget that there’s a “me” here doing the work.  I enjoy that kind of disappearing.  I grow so enthralled with the meter or a rhyme, that I forget completely that there’s a “Robin” at the table.  So with “Voyage” the rules were simple for me.  They were difficult to pull off, yes, but they were simple.  I think we mistake simple for dull, which it is not.

NS: I imagine you surrounded by thousands of pages, puzzling through it all.

RCL: Yes, exactly.  Not thousands, but hundreds single-spaced pages for sure.  I worked chronologically, not only in terms of the titles, but also in terms of the “narrative.” It wasn’t a very conscious attempt at sanity, but somehow I knew that just starting at the so-called beginning, ancient Greece and Rome, would be the best place to begin.  Actually, I wrote the invocation first, both for my own sanity—a sort of prayer for help—and also because it seemed appropriate to the project itself.

Once I began assembling it, it was all I could think about. And then when it was over, I mourned.  I was sick to my stomach for many months.  I felt as if I had been in the company of all of those historical figures, and then, quite unexpectedly, I realized there was nothing more to say. Every time I thought I should change the rules, or add something clever, or insert my own two cents, I’d ask myself, “What can one possibly say in the face of this history?”  Or “What is with this compulsion to speak at this moment?”

NS: What was with the compulsion?

RCL: Well, there were two reasons.

First, I supposed I doubted my own agency as a writer.  Or perhaps my trepidation was about finding my footing into the project.  At the beginning, there was this voice always in my head saying You can’t do this, Robin.  You can’t do this. Perhaps I was afraid of the power I felt. “Voyage” required me to tell the truth about my mind, about the ways I perceived the world. So the compulsion to speak was actually a more clever version of that same knee-jerk habit I have of wanting to make my subject palatable (pretty?).  It was yet more of the never ending internalized misogyny telling me good girls don’t do such things, don’t write such things, don’t think such things.

And then second, I felt as if I wasn’t the narrator, but History was.  History was writing her own confessional poem.  What I thought about it, or what anyone else thought about it, became insignificant.  Her story was far more compelling than anything I could add. Indeed, the confession was so profound, the titles were so complete, my compulsion to comment would have been a great offense.  I love that Joni Mitchell song, that begins, “Don’t interrupt the sorrow.  Darn right!”  I felt that if I inserted my own commentary, in addition to the titles, I’d be interrupting History’s sorrowful, visceral confession.

NS: Her confession is enchanting, like a spell being cast. By the poem’s end, if it were a spell, what would you have happen?

RCL: Well, when I first wrote the title poem, I fantasized about emailing it to every woman in the world.  I wanted to say, “Dearest Girl, here. In case you are not feeling well inside, psychologically, this might help to explain why.”  Other than that, other than knowing that most women would read this and feel some sort of mirror, I really had no true fantasy that anyone would want to read this poem.  I always wanted it to be a gift for the world, especially for women, yes, but for everyone, men too, to see and consider just how long we’ve been making pretty art about our hate.

When I first began “Voyage of the Sable Venus,” I envisioned (at most) a 2 or 3 page poem. Once I began to conduct research, however, I realized the relationship between race and Western art contained a history so consistent, so ancient, and so long, that it far exceeded my expectations by millennia.  Colonialism, for example, was an infant.  And hate, I discovered, was far more persistent and insidious than I could have ever imagined.  But the most alarming discovery was this: instead of concealing this tendency toward hatred, or attempting to overcome or integrate it, when it came to art, human beings appeared to enjoy demeaning each other.  Indeed, we seemed more interested in ornamenting and decorating hate.  When it came to race, we used art to make hate pretty.

I guess the answer would be that if my poem could cast a spell, the spell would be for us all to learn how to retract our projections, to better integrate our lives so that we can stop pretending that the hatred we feel is about anything other than our own private nightmares.

NS: At the book’s center is the title poem, and bookending the collection are highly personal poems. Why is the book arranged in this way?

RCL: It’s divided in this way because the Goddess gave me the best poetry editor in the universe, Deborah Garrison. Deb could see the book’s form long before I could. At first, the book was just going to be the long poem, “Voyage,” an idea we both liked. Then Deb asked me, with a tenderness that changed me a little, how I might feel about adding some poems before and after “Voyage.”

She said that “Voyage” made you want to know more about the person who wrote it. This, of course, made me horribly uncomfortable because I didn’t want to be known more. And so over the year we had discussions about representations of the self. What is a poem, after all, what work can a poem do? And, it was Deb’s brilliant idea to begin the book with “Plantation” and end it with “Félicité.” If it had been up to me, I’m not sure I would have included “Plantation” at all. Or I would have hidden it somewhere, concealed it.

NS: In “Plantation” and “Félicité,” the speaker admits that the black side of her family once owned slaves. As this admittance is recurring, how should readers read this in context of the collection as a whole?

RCL: For years, I was ashamed of my family’s history. I feel no shame now.

We’ve wasted an obscene number of centuries in this country simply attempting to have a real conversation about slavery, indigeneity, colonialism. The horrific irony that our country—the site of so many countless atrocities—remains one of the few governments that refuse to participate voluntarily, whole-heartedly, in international courts or create our own truth and reconciliation commission, says so much about how far we are unwilling to come. And so while I wrote these poems because I very much needed to, personally, I decided to publish them because I wanted to use my own private history publicly, to hopefully encourage myself and readers to think about ways we can enact our own Interior Truth and Reconciliation Commission in the absence of our nation’s guidance or participation in these processes.

I also published these poems because I did not want to hide from my reader, and I do not want to waste my reader’s time by strutting before them in a mask. If the reader is going to be generous with their attention, I mustn’t just pretend to feed them, I must give them something real to eat.

NS: The ghazal towards the collection’s end, “Pleasure & Understanding,” stretches the form. You obviously have no problem modifying form to suit a poem’s needs.

RCL: I first heard a ghazal in India, live, with musicians and singers, as well as an entire audience who had grown up with the whole medieval history of the musical form, from the classical Persian court all the way through Bollywood to popular radio in New Delhi. To sit in an audience with a band of musicians—with tablas and mridangs, who are in 5th gear from the gate—who can sustain aghazal with the audience hanging on every word, waiting to share the explosion that occurs at the end of every couplet, is an experience I will never forget.

They took one word or phrase and turned it upside down, inside out, setting it down again and again in the frame of each distinct stanza, showing the audience repeatedly how little we actually know about a single word, or better put: how powerful and enduring one single word can be, how one word can be a lady and then a man and then a street or a car, too. It reminded me of live jazz, or like gospel—which is to say I saw and heard the genius of improvisation. And I thought, “My lord, have brown people been taking restrictive aesthetic structures and turning them into taffy for millennia?”

One of the gorgeous restrictions about the ghazal is that the stanzas are not supposed to be related at all! I actually failed miserably at the end, when I succumb to romance and address. Love got the better of me. What can I say, I’m a poet! Form is there to see how far you can stretch it and still have it stand. In this regard, I think my aesthetic is informed deeply by several black literary and musical traditions. I grew up watching people improvise with form in every way, so asking the English ghazal to go back to its darker roots seemed very natural. We take forms and tear them to pieces for pure pleasure. Black artists pick their teeth with form.

Nicole Sealey is the author of The Animal After Whom Other Animals Are Named, winner of the 2015 Drinking Gourd Chapbook Poetry Prize, forthcoming from Northwestern University Press.