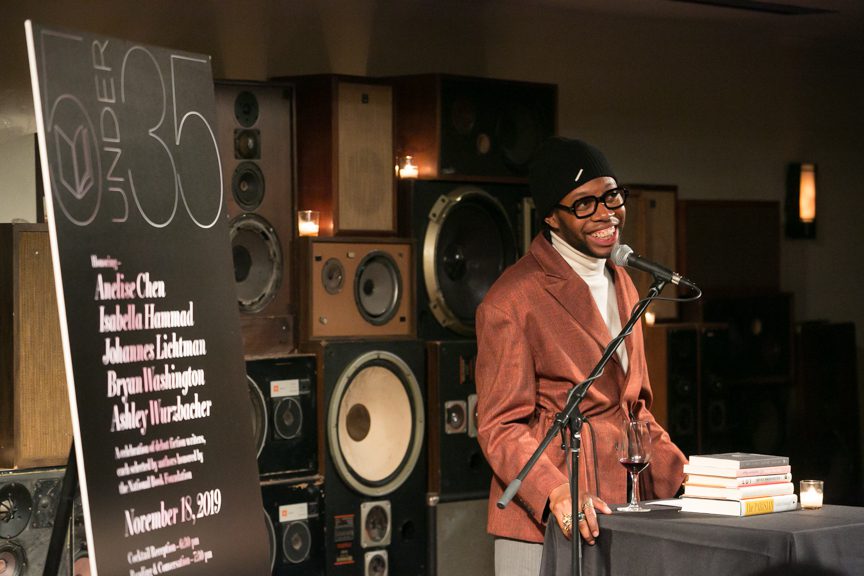 Jeremy O. Harris, writer, and performer, and acclaimed playwright of Slave Play, hosted the 5 Under 35 celebration on Monday, November 18 in New York City, at an invitation-only ceremony. The Foundation’s 5 Under 35 program recognizes young, debut fiction writers whose work promises to leave a lasting impression on the literary landscape. 5 Under 35 is sponsored by the Amazon Literary Partnership and more information about the program can be found here.

Jeremy O. Harris is a writer and performer living in New York City. His plays include Slave Play, “Daddy,” Xander Xyst, Dragon: 1 and WATER SPORTS; or insignificant white boys. His work has been presented or developed by Pieterspace, JACK< Are Love, The New Group, NYTW, Performance Space New York, and Playwrights Horizons. In 2018, Jeremy co-wrote A24’s upcoming film Zola with director Janicza Bravo. In television, he is developing a pilot with HBO and consulted on their new series “Euphoria.” He is the 11th recipient of the Vineyard Theatre’s Paula Playwrighting Award, a 2016 MacDowell Colony Fellow, an Orchard Project Greenhouse artist, and under commission from Lincoln Center Theatre and Playwrights Horizons. Jeremy is a graduate of the Yale MFA Playwrighting Program. Upcoming: A Boy’s Company Presents: “Tell Me If I’m Hurting You,” and “Daddy.”